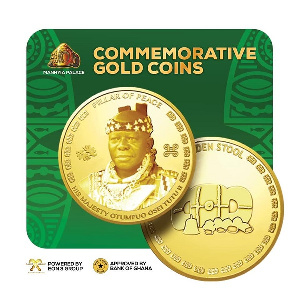 The coin is made of 24-carat fine gold

The coin is to celebrate Asantehene’s contribution to peace

The launch is under the authorization of the Central Bank, the Bank of Ghana, for Gold Coast Refinery Limited to mint the commemorative gold coins to celebrate the Asantehene.

This is the first time in the history of this country that non-circulating commemorative coins meant to celebrate and honour people, places, events and institutions are being issued.

The Precious Minerals Marketing Company (PMMC) is collaborating with an Accra-based Ghanaian business solutions provider, the E ON 3 Group, to launch the gold coins.

The coins are of 99.99 per cent assay at 24-carat fine gold, with a diameter of 37mm and weight of 31.104 grammes each. It is described by the organizers as the ‘treasured collectors articles’.

“The face of the gold coins bears the image of the Asantehene, with the Adinkra symbols ‘Bi Nka Bi’ and ‘Mpatapo’, which symbolise peace, harmony and reconciliation.

“The reverse bears an image of the Golden Stool (Sika Dwa),” a statement from the organisers said. 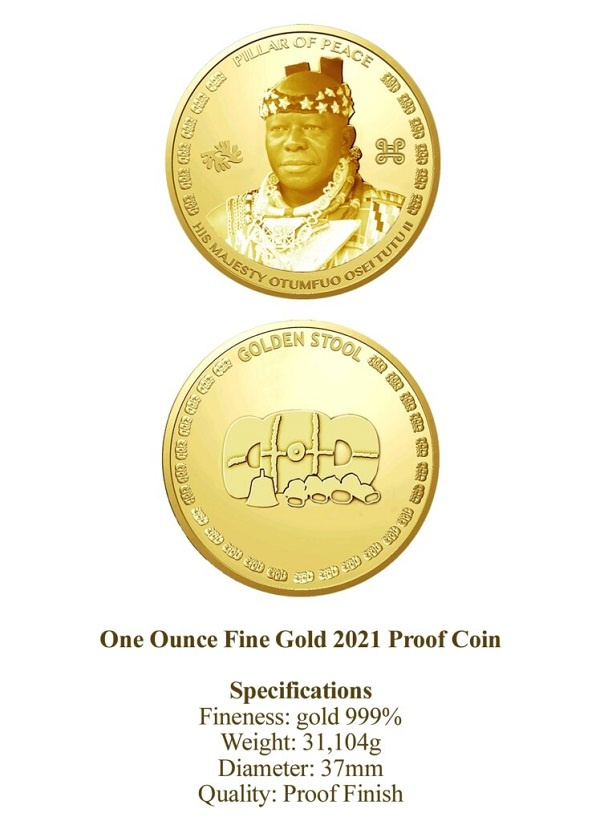 Apostle Francis Amoako Atta of the Parliament Chapel International in Accra has said, the commemorative gold coins which will be launched today at the Akwasidae has some spiritual connotations.

Speaking on Angel TV, Apostle Amoako Atta referenced the Bible and drew similarities between the commemorative gold coins and the gold wealth of the biblical King Solomon.

He explained, “On 12th December, something wonderful will happen in Asanteman when Otumfuo is going to be honoured. The same 12th December is God’s day. Heaven will meet to discuss the next generation. It shows that Otumfuo has opinion leaders who are spiritually enlightened and intellectuals.”

He opined that, it is not for nothing that Otumfuo has earned the accolade of King Solomon.

He noted that, December 12, is the same date the biblical King Solomon brought out all his gold possessions for the world to see.

Still dwelling on the spirituality, the Apostle indicated further, “In the spiritual realm, it means the mystery of 999 Gold Coins. It means the completion of a cycle and the beginning of a new age. It means in the year 2022, Asante Kingdom is going to step into another high level. It means the dawn of a new era, so anybody who will get the opportunity to purchase or hold the coins will be blessed because the coins represent another Kingdom.”

Since he acceded the Golden Stool in 1999, Otumfuo Osei Tutu has pursued conflict prevention and resolution with extraordinary finesse.

Apart from the numerous chieftaincy, land and family disputes that he had resolved in Asanteman, he has also extended his exploits into other areas, working with the other members of the Committee of Eminent Chiefs to douse the flame of conflict in the Dagbon Traditional Area in the Northern Region.

Again, in the run-up to the 2012 presidential election, the Otumfuo, responding to a request from the National Peace Council, committed the presidential candidates to sign a peace accord, the famous ‘Kumasi Declaration’.

On September 13, 2019, the Asantehene, on the invitation of the United Nations, delivered the keynote address at the High-Level Forum of the 20th Anniversary of the UN General Assembly Resolution 53/243 on the Declaration and Programme of Action on Culture for Peace, during which he spoke on how to use traditional methods and culture to engender peace in Asanteman and Ghana.

Source: www.ghanaweb.com
Related Topics:OTUMFUO
Up Next