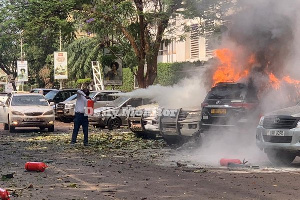 The group confirmed that the attack had been carried out by their suicide bombers, al-Amaq, a news agency affiliated to them reported late Tuesday.

The operation is the first time IS has claimed a suicide attack in Uganda since its activities were recorded in the country in October 2021.

IS identified the two attackers as Abu Sabr al-Ugandi (Arabic word meaning someone from Uganda). He detonated a bag of explosives near a checkpoint at the Central Police Station.

The second attack was carried out by two attackers on motorbikes – “Abu Shahid al-Ugandi and Abu Abdul-Rahman al-Ugandi” – who also detonated similar explosive bags targeting guards at the parliament building.