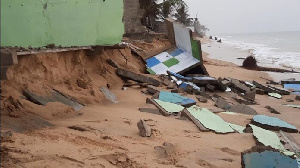 The paramount chief of Some Traditional Area, Torgbi Adamah III, yesterday appealed to the government to commence the second phase of the Keta Sea Defence Project to minimise the sea destruction on communities along the coast.

According to him, the project started from Blekusu stalled when it got to Agavedzi adding that the discontinuation of the project had led to the current situation.

Torgbi Adamah III made the appeal at a press conference organised by the Some traditional authorities at Agavedzi to sympathise with the affected residents.

He explained that since the affected communities extend to his traditional area, as their father, he saw it necessary to add his voice to the earlier appeals to the government to act fast to avert further destruction of homes.

The paramount chief noted that the most recent of such tidal destruction that occurred some few days, ago specifically at Agavedzi, Salakope and Amutinu, led to the washing away of homes and properties of these affected communities.

He used the occasion to ask that the government to make the contractor come back to site and continue the project without further delay.

Torgbi Adamah further appealed to the government to liaise with the Seven Sea Salt Company Ltd to allow residents who had lost their homes to the sea, to use part of its concession in the lagoon to put up temporary structures to house themselves.

He expressed his gratitude to the National Disaster Management Organisation for acting promptly to provide food and other relief items to the affected people.

The paramount chief also thanked the Member of Parliament for Ketu South, Madam Dzifa Abla Gomashie, for sympathising with and showing concern to her people.

He appealed to philanthropic individuals and organizations “to provide any logistical assistance that would give our people some form of relief”.

According to him, with only 10 meters of land between the sea and the main road and some parts of the Municipality, the destruction might strike soon and the entire stretch destroyed if nothing was done immediately.