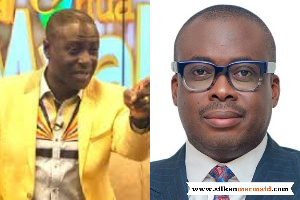 Citinews.com reports that Captain Smart is said to have made defamatory comments against the host and also accused the journalist of taking bribes.

He is also seeking an order from the court directing the defendants to retract and apologise for the comments “on all media platforms operated by the 2nd defendant” as well as an “injunction restraining the defendants from further publishing and causing to be published the said similar words defamatory of the plaintiff.”

In an edition of Onua Maakye, Captain Smart berated Paul Adom-Otchere after an editorial the latter did to respond to remarks Kwasi Kyei Darkwah (KKD) made that sought to implicate finance minister Ken Ofori-Atta.

KKD, a celebrated media and tourism expert on GTV’s Breakfast Show, accused the finance minister and government of enriching themselves at the expense of the Ghanaian people.

In his fury, KKD said it was improper for certain people in government and their businesses to keep making money from Ghana’s loans in the name of financial advisory.

But Adom-Otchere defended the minister on the basis that the selection process for advisors was fair and hence, the company earned it on merit even.

Among others, Adom-Otchere recalled how Ofori-Atta’s company was selected in that regard even when his party was in opposition.

That narrative was vehemently criticised by Captain Smart on his morning show, Monday amid a barrage of insults.

Backing KKD, Captain Smart said it makes no sense to him that the finance minister’s company gets 9.6% from each loan the country takes.

“Honestly speaking, Paul Adom-Otchere is my senior but he’s unwise,” Captain Smart said as he spewed some unprintable words.

“Let me be sincere with you; you don’t think. You see that Kwame Sefa Kayi [Peace FM morning show host] is now silent? He’s observing the system because he doesn’t want to commit any blunder for Ghanaians to descend on him. You’re being a fool so stop, Paul.”

Captain Smart further alleged that Paul Adom-Otchere’s appointment as Board Chairman of Ghana Airports Company Limited was political, stressing that it was aimed at making the broadcaster the government’s poodle.