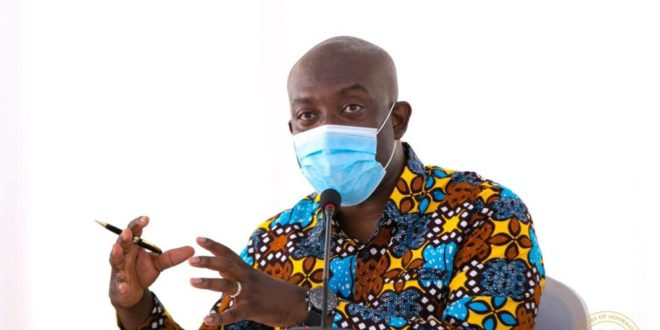 Kojo Oppong-Nkrumah, Information Minister, has said the recent cabinet retreat chaired by Nana Addo Dankwa Akufo-Addo at the Peduase Lodge over the weekend was very heated.

According to him, all the ministers who were present at the retreat had various views as to how the current economic crisis should be managed by the government and the President interrogated each one of them “but it ended well.”

“[Peduase] was good, very heated. When you have all sorts of views being proffered about how to manage the current situation, and the President seems to interrogate each one of them, it gets heated sometimes but it ended well,” Kojo Oppong-Nkrumah told Paul Adom-Otchere on the Tuesday, March 22, 2022 edition of the Good Evening Ghana show.

President Nana Addo Dankwa Akufo-Addo led a crunch three-day cabinet retreat that took place at Peduase in the Eastern Region over the weekend.

At the end of deliberations, some major decisions to deal with economic recovery, amid the harsh aftermath of the COVID-19 pandemic, were agreed upon.

The reliefs include the opening of the country’s land borders, the easing of general COVID-19 restrictions, and measures to arrest the depreciation of the cedi.

There are also measures to tackle rising fuel prices occasioned by the global economic turmoil brought on by the ongoing Russia-Ukraine conflict and measures to address the persistent rise in the prices of goods and services.

In a tweet last Thursday, the Minister for Information, Kojo Oppong Nkrumah, disclosed that the essence of the retreat was to enable the government to proffer solutions to ease the burden on Ghanaians.

“In the coming days, details will be announced, including when and how the borders will be opened, the removal of some testing protocols, shoring up the currency and further cutting expenditures while assuring growth,” the minister told journalists on the sidelines of the retreat.

It is expected that Ken Ofori-Atta, the Finance Minister, will provide details on the reliefs and which sectors will experience expenditure cuts.

The reliefs are also expected to answer questions being posed by economic watchers on how the government will respond to current global economic challenges.

Previous Chief of Staff, others had to kneel to beg ‘wicked’ Adwoa Safo – Annoh-Dompreh
Next Tenant, 59, jailed 23 years for raping landlord’s daughter