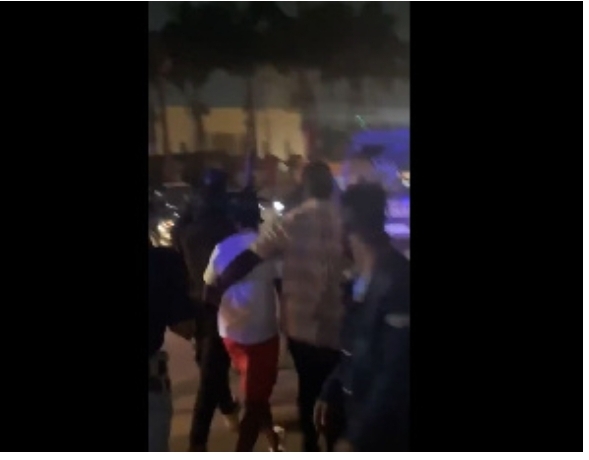 Jamaican dancehall artiste Popcaan has been in Ghana for a while now having the best time of his life judging by news items on his stay.

However, around midnight on Wednesday, January 5, 2021, the award-winning international artiste reportedly run into an altercation at a popular bar.

Although reports around the incident have been scanty, GhanaWeb understands that it had to take the presence and efforts Police officers to rescue the artiste when pandemonium broke out at the joint located at East Legon, a suburb of Accra.

Unconfirmed reports indicate that a gang of robbers had attempted to rob the artiste and his personal security stepped in.

The situation escalated and thus required the presence of the police who managed to bring the situation under the control and ended up whisking the artiste away.

In a video of the incident sighted by GhanaWeb, a group of men are seen forcing their way into the pub with one pointing out the Jamaican artiste.

The police arrive to the area amidst the firing of gunshots.

One of the supposed attackers is then brought out in handcuffs by the police and Popcaan is latter led out in the company of the officers who guarded him into his car and sped off.

Another video of the incident uploaded by a Jamaican Youtuber with the account name Boom Bye Bye TV claims that the supposed attackers of the artistes attempted to rob him and that 3 were shot by his security.

Popcaan who has been enjoying his Christmas holiday in Ghana recently spent $100,000 to purchase an Armand de Brignac Ace of Spades Gold Brut champagne at an auction held by Ghanaian millionaire, Nana Kwame Bediako alias Freedom Jacob Caesar aka Chedder.

In a recent post on his Twitter page Popcaan who seemed to have enjoyed his stay in Ghana urged the government of Ghana and Jamaica to work out a direct flight between the two countries ostensibly to facilitate travel to his newfound home.

“Happy new year everyone to the government of Ghana and Jamaica, we need a straight flight from Jamaica to Ghana!!! Make it happen please thanks in advance (sic),” the artiste posted.

Previous Shatta Wale smiles at the money he made from December shows
Next Dr Isaiah Blankson, NASA’s ‘Speed Demon’ passes on