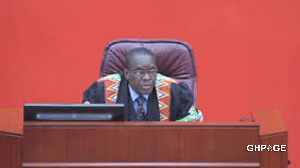 Fifteen members of Parliament have tested positive for the deadly covid-19 so far since mass testing began last week.

The revelation comes after the speaker of Parliament Alban Bagbin directed all MPs and staff to mandatorily test for the virus.

Following hesitation from some MPs, some of them had their test done on the premises whiles others did them at private health facilities.

Out of 227 MPs who submitted themselves to be tested by the Noguchi Memorial Institute for Medical Research, 15 came out positive.

Likewise, out of the 193 staff that submitted themselves for the test, 56 tested positive.

Positive cases have subsequently been directed to self-isolate and have been prescribed medication to aid in their recovery.

The Speaker of Parliament made the announcement today February 24.

I make this statement today to formally inform honorable members of the Covid-19 situation in parliament and to update you of the results received so far from the Noguchi Memorial Institute for Medical Research on the testing of members and staff which ended yesterday.

The Institute has generously accepted to do a mop-up tomorrow Friday 5th February 2021. I want to urge members who haven’t taken the opportunity to do so to kindly do it tomorrow.

oOt of those who submitted themselves for the test in parliament, fifteen members of parliament tested positive to the virus. All the fifteen members have been conducted and advised to self-isolate. They have also been given prescriptions to facilitate their recovery.

Results of 193 staff received so far reveal that 56 of them tested positive to the virus. All the 56 staff have been contacted and advised to self-isolate. They have also been given prescriptions to facilitate their recovery.

In consultation with leadership and the clerk, I have decided to implement the following measures to curb the further spread of the virus.

1. The house will from text week sit twice in a week. That is on Tuesdays and Thursdays.

SC ruling: Petitioner suffered a major blow when his application for inspection was dismissed – Lawyer