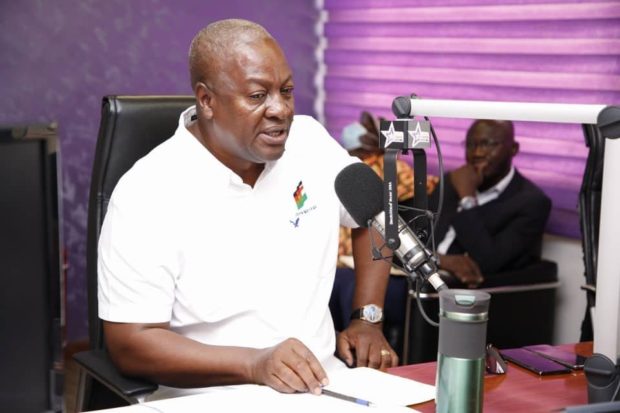 Former President John Mahama has said some one million extra ballot papers which were printed for the 2020 general elections, were thumb-printed in favour of the governing New Patriotic Party and stuffed during last year’s polls.

“More than one million extra ballot papers were printed, which the EC claimed happened by mistake but on the day of the elections, some of the more than one million extra ballot papers had already been secretly thumb-printed in favour of the NPP”, Mr Mahama alleged when he addressed the Divisional Chief of Prestea Himan, Nana Nteboah Prah, recently, as part of his Thank You tour of the Western Region.

“And, so, all these things dented the credibility of the polls and caused an embarrassment”, the 2020 flag bearer of the main opposition National Democratic Congress said.

He noted that it was important that everybody felt satisfied with the results of any election but fudging results stir up a lot of suspicion.

Mr Mahama also complained that the way the Supreme Court dealt with his election petition case was not fair.

Responding to a recent assertion by the Chair of the Electoral Commission, Mrs Jean Mensa, that the 2020 polls were the best-ever for Ghana, Mr Mahama said: “I heard her [Jean Mensa] say ‘it’s the best election Ghana has ever had’ and yet you run away from scrutiny at the Supreme Court”.

“So, how do you boast that ‘it’s the best election has ever had?’”

“If you believed it’s the best election Ghana had, then you should have mounted the witness box to be interrogated for everyone to ascertain that fact”.