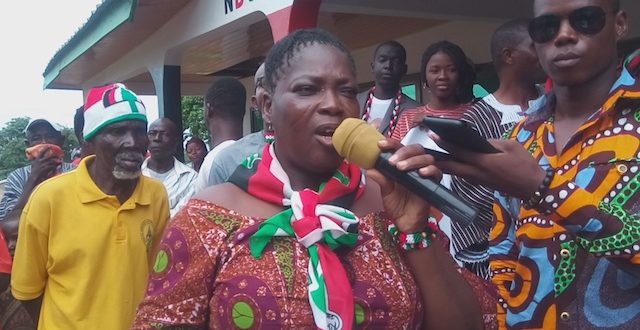 A senior lecturer at the University for Development Studies (UDS) has warned Ghana would ‘crumble to dust’ should the governing New Patriotic Party (NPP) get an additional four-year term at the 2020 general elections.

Dr Vida Nyagre Yakong, whose word of warning is anchored in what she says is “happening” in the country currently, is also beating the drum for harmony among members of the country’s main opposition party— the National Democratic Congress (NDC)— as one of the indispensable things it would take for the NDC to remove the NPP from power next year.

“We should all ensure that our campaign is devoid of violence, intimidation and discrimination. If we do this, it means that we are crashing the party. And when we crash the party, it means our vision for 2020 is going to be meaningless. And if this vision is not realised, the whole of Ghana is going to crash because we know what is happening right now in the country,” she told NDC supporters in Nabdam, a constituency in the Upper East region.

The NDC will be going to the polls in less than five days nationwide to elect parliamentary candidates for the 2020 main elections. Dr Yakong is in a three-horse race with two other aspirants seeking victory this Saturday— Francis Sampana Zuure, a chartered accountant who is appearing on a parliamentary ballot paper for this first time, and a medical doctor who is the Member of Parliament (MP) for Nabdam, Dr Mark Kurt Nawaane.

This is Dr Yakong’s second attempt, her debut in 2015 when she finished behind Dr Nawaane who went on to unseat the NPP’s Boniface Gambila at the general elections the following year.

Meanwhile, some UDS students have joined Dr Yakong’s campaign tour of the constituency, backing her to throw Dr Nawaane out of Parliament to become Nabdam’s first ever female lawmaker.

The students’ open solidarity is, among other reasons, in recognition of some support they say the senior lecturer has given them and some other needy people with no strings attached.

“I have known Dr Vida from the very moment I arrived at the UDS as a student. From that very moment, I really saw leadership in her. She exhibited it. One of the things she does is the assistance she gives to students. She has assisted so many students at the Tamale UDS campus regardless of who you are or where you hail from.

“If she could do this as a lecturer, you can imagine what she will do if she goes to Parliament. She has touched so many lives. She will transform the entire constituency if given the nod. There is going to be a leadership transformation, as her motto says— Opportunities for All. She is going to be a mother for the whole constituency,” said Abdul-Razak Mohammed Hardi.

Another UDS student remarked at Nangodi, Nabdam’s district capital: “It is prudent we support the aspirant we think can change the lives of people. She has the passion to actually touch the lives of people. I’m here today to support Dr Vida. She has done a lot towards rebranding TEIN at the UDS Tamale Campus.”

Putting the vulnerable first is one of the development plans Dr Yakong says she has and will implement if she breezes through the primaries and the general elections.

“Let us all reflect, put Nabdam first, put the party first, put our brothers and sisters first who are vulnerable and move the constituency forward, move the country forward, move our families forward. This is what I will do when I come on board. When I’m voted into power, the areas I will focus [on are] youth development, health, women and children empowerment and agriculture. These are the pillars of development.

“To my supporters, continue with the hard work that will bring me on board, and when that happens, it means that you stand to benefit. When you vote for me, you are voting for yourselves; it’s not for me, because you have voted for development and development is you, not the one you have voted for. And if I have to transform lives, it is your lives that will be touched and not only mine,” she told supporters in the district capital.

Her campaign message also has been emphatic in assuring constituents that she would not be a divide-and-conquer MP if elected to represent them.

“This is the beginning of change, and this change is in progress— change that will bring positive results, change that will bring about meaningful life for all of us. We are all Nabdams and whatever is due us we must all have access to that. If you vote for me, I’m not going to be an MP that would divide and rule. I wouldn’t be an MP that would have at the back of the mind that I saw this face that wasn’t with me during the primaries.

“I want to bring everybody on board and together we can move Nabdam forward. My only reason for contesting is to help transform life, is to help lift the place, is to help lift party members to realise their life potential and not to divide them and rule. It is time for change. It is time for change of leadership— the type of leadership that will go the extra mile to mobilise resources to support the people. And it will get better when we put women in Parliament. Let’s go out and do a clean campaign,” stated Dr Yakong, who is also the National Women’s Organiser of the Progressive Intellectuals.

Previous Killing of 2 cops: IGP orders fast probe
Next Galamseyers to get 15 – 25yrs in jail – Akufo-Addo