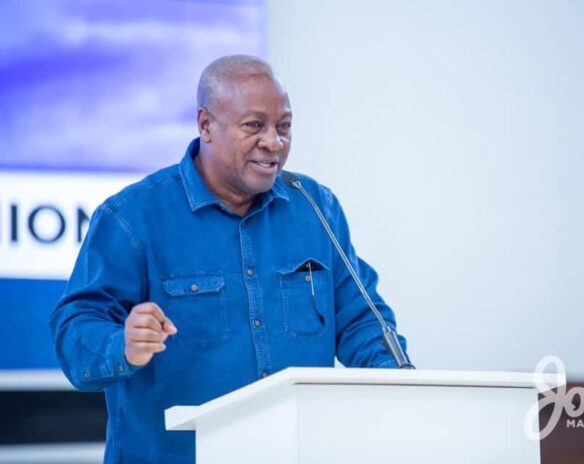 • Pro-NPP group, ‘Fixing The Country’ Movement is set to petition the Special Prosecutor over the Airbus bribery scandal

Pro-New Patriotic Party group, ‘Fixing The Country Movement’ have announced that they will be petitioning the Office of the Special Prosecutor to revisit the Airbus bribery scandal.

The group said it will also be petitioning international governments over the issue particularly the United Kingdom’s High Commission and the United States Embassy.

They want former President John Dramani Mahama, who they insist played a key role in the scandal, to be held responsible and ultimately punished for his role.

Addressing a press conference on September 5, 2021, leader of the movement, Ernest Owusu Bempah stressed that holding Mahama responsible will be nothing new given that a number of former presidents on the continent and elsewhere have been jailed for corruption offences committed during their tenure.

He specifically cited former South African president Jocob Zuma who was recemtly jailed by the country’s top court for contempt whiles he still faces a raft of corruption charges during his time in government.

Owusu Bempah believes that Mahama is the person code-named ‘Government Official 1’ in the Airbus scandal report.

“It can be agreed that, the fight against corruption is a major challenge. The speedy trial and imprisonment of the henchmen of frustrated John Mahama will end this obscene irony. Which is why Fixing The Country Movement is in the process of petitioning the Special Prosecutor to revisit the Airbus corruption scandal and deal appropriately with John Mahama.

“As matter of fact a host of former world leaders have served time behind bars for corruption committed while they were in power. From Europe to Middle East to Asia to South America to Africa. The list is endless.

“Some have been able to avoid prison through appeals and others are on trial, such as South Africa’s past president Jacob Zuma who is facing 16 counts of graft from before his presidency,” the Bempah, flanked by other leaders of the group, said.

He added that the ‘Movement’ was particularly angered by recent comments by Mahama, who during his “Thank You Tour” of the northern regions made comments to the effect that the Nana Addo Dankwa Akufo-Addo government was engaging in grand corruption.

Mahama also tasked Ghanaian voters to kick out the NPP come 2024 in order to ensure that the succeeding NDC government will hold them accountable for corrupt deals.

The call came at a time the NPP is also tasking members to unite and consolidate the successes of government in order to ‘break-the-eight,’ reference to a phenomenon where a ruling party loses power after eight years.

The Movement insists that the Mahama government was as bad as it gets in the area of corruption and that Mahama specifically lacks the gravitas to accuse Akufo-Addo and his appointees of corruption.

A recent development in the UK’s probe on the scandal is that the Serious Fraud Office had dropped all charges against a key suspect citing lack of evidence.

A My News Ghana report citing experts noted that, the development could likely affect Ghana’s case against the man (Phil Middlemiss) who had been declared wanted in Ghana along with two others for the Airbus scandal.

It also could make it difficult for Ghana’s Special Prosecutor who is relying on the UK SFO to get anyone in Ghana or the UK prosecuted over the Airbus SE scandal, the report added.

Ghana’s first Special Prosecutor, Martin Amidu, had opened an investigation into the said scandal before he left office, his successor has not stated whether he is keeping the said docket open.

WATCH: Akufo-Addo reveals why appointment of MMDCEs has delayed