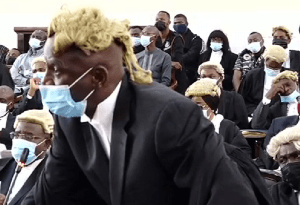 Lawyer for the 2nd Respondent in the ongoing election petition hearing, Mr. Akoto Ampaw has asked the Supreme Court to strike out over 20 parts of the witness statement of Rojo Mettle Nunoo, the third witness of the petitioner.

Mr. Ampaw objected to the parts of the statement during proceedings on Friday, February 5.

Counsel for the petitioner, Tsatsu Tsikata, however, disagreed with him.

Mr. Tsikata told the court not to strike out even one part of the witness statement.

Mr. Robert Joseph Mettle Nunoo had said in his witness statement that the Chair of the Electoral Commission (EC), Jean Mensa told him that, all the concerns he had raised in the strong room against the collation of the presidential results were genuine.

He added that Mrs Mensa told him those concerns were going to be addressed.

“My colleague, Dr Michael Kpessa-Whyte, and, I on many occasions pointed out errors in the figures and words on the sheets that were brought in which ultimately affected totals and assigned results. This sometimes led to EC officials making phone calls on the basis of which they sought to explain and correct some of the things we pointed out.

“I cannot tell to whom those phone calls were made. I cannot tell if the calls were to EC officials to some other people who were also involved in collation process. There was no transparent process in this regard.

“At a point, I went to the office of the Chairperson of the Electoral Commission on 8th December 2020, I wanted to bring to her attention that what was going on in the strong room could not lead to a declaration of the results at the end of the day, as she had promised the country. She actually told me, in response, that the concerns I had raised were genuine and she would have them looked into.”

“Mrs. Jean Mensa informed me that there had been a meeting held earlier in the day between the Petitioner and the Peace Council, something I was unaware of at the time.

“After I further drew her attention to some of the issues that were coming up in the interactions in the strong room, she said very directly that we should go and speak with the Petitioner. Having regard to her earlier reference to the meeting between the Peace Council and the Petitioner, which she had obviously been briefed about, I took seriously what she said.”

Related Topics:AKOTO AMPAW
Up Next

The court is at a loss – Chief Justice tells Tsatsu Tsikata