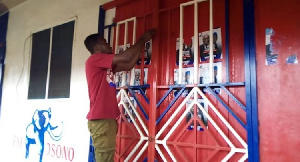 • The group have reportedly locked up the NPP office in Apedwa

Some New Patriotic Party Members of Apedwa in the Abuakwa South Constituency have reportedly gone on rampage following the announcement of the President’s nominees for Metropolitan, Municipal and District Chief Executives.

The party supporters according to a Daily Guide report are unhappy with the removal of their former MCE, Kojo Ofori Safo, who is to be replaced by Madam Akosua Asabea Annan.

According to the angry supporters, who were clad in red armbands and holding placards with various inscriptions, their displeasure stems from the appointment of only indigens of Kyebi for the various positions in the constituency leaving other communities out.

The group reportedly begun raging from Sunday, September 19, when the list of nominees was announced by the Ministry of Local Government.

They are said to have besieged the party’s office at Akyem Apedwa on Wednesday and locked it up.

The angry supporters also burnt flags and other paraphernalia belonging to the NPP to register their displeasure.

The former MCE, was in office for just two years before his removal and according to the angry supporters, he was left out of the President’s new list of nominees as a means to satisfy the interest of some persons.

They claim Mr Ofori was denied reappointment because he is not from Kyebi.

“We don’t want any appointment except the MCE position. We are demonstrating to tell the President that we are not happy with the nomination that he has made in Abuakwa South” adding that “winning an election is a major contributing factor to who becomes the next President and MCE thereby if we have done 100 percent of both why must we be denied the second when the President got the first,” one of the demonstrators is reported to have said.

A former Polling Station Women Organizer of Apedwa reportedly said “We are demonstrating to tell the President that we have ceased to work for the party.”

There have been recorded incidents of demonstrations against the President’s nominees in some MMDAs.

Such incidents have been recorded in Chereponi, Odododiodio, and Nsawam

Source: www.ghanaweb.com
Related Topics:DEMOMMDCENPP
Up Next