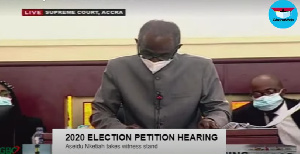 Friday, January 29, 2021, witnessed, amidst the heat, some moments of laughter in the Supreme Court, when witness for the petitioner, Johnson Asiedu Nketia, took his turn in a cross-examination exercise.

Mr. Nketia was one of two witnesses presented by John Dramani Mahama in the Election Petition Hearing, contesting the performance of the Electoral Commission (1st respondent) in the December 7, 2020 polls, and the declaration of a win for President Nana Addo Dankwa Akufo-Addo (2nd respondent).

After presenting his witness statement to the court on Thursday, January 28, 2021, the court proceeded with the cross-examination exercise where Lawyers of the 1st and 2nd respondents took turns investigating the statements as presented.

It was a rather interesting period, as Asiedu Nketia didn’t fail to dish out some humour amidst the tension.

The General Secretary of the National Democratic Congress (NDC) requested a calculator to enable him add figures to make his case while being cross-examined by lawyer for the 1st Respondent.

Lawyer Justin Amenuvor had raised questions about miscalculations of figures as far as total valid votes presented by the petitioner were concerned. He argued that the total valid votes as captured on all forms signed by their agents will amount to 1,196,751 and not 1,236,940 as written on the form.

To this, Mr. Nketia who admitted that he could not readily remember the total figures requested that he gets the chance to add the figures again.

He was presented a calculator by the 1st respondent’s lawyer after which he began his calculations. Halfway through, he paused and said; “It appears your calculator is not….” Laughed and continued.

This entire scenario sparked brief laughter in the court room.

Mr. Asiedu Nketia, was again asked questions regarding an analysis presented by the petitioner to the effect that the 1st respondent was inaccurate with figures regarding the Techiman South results leading to an inaccurate declaration.

Lawyer Amenuvor put it to the witness that the petitioner’s analysis of the trends on that day were wrong. Aseidu Nketia objected to this, maintaining that the analysis was done based on information presented by the 1st respondent – EC Chair, Jean Mensa on December 9, 2020.

To this, Lawyer Amenuvor insisted that Jean Mensa was right because he (Asiedu Nketia) knew the total valid votes in the election as 13,121,111 at the time she was making the declaration.

Mr. Nketia who insisted he didn’t understand the question and why it was being put to him instead of the petitioner who had stated that said;

“I cannot answer for the petitioner, you are asking me questions that ought to be answered by the petitioner and I’m saying that I’m not the right person. I took these figures from the 1st respondent’s declaration and before they were declared, I couldn’t have known what they were declaring,” he said.

It is not in my witness statement:

Mr. Asiedu Nketia was at it again when Lawyer for the 2nd respondent (Nana Addo Dankwa Akufo-Addo) took over to cross-examine him in court Friday.

Lawyer Ampaw had put it to Mr. Asiedu Nketia, that during a series of press conferences, post the election declaration, had suggested that the petitioner, and flagbearer of the NDC, John Dramani Mahama, had won the elections, and by the ‘votes they had collated, the President-elect”.
To this, Asiedu Nketia had this response;

“My Lord, that is not in my witness statement,” sparking laughter during the hearing.

In the heat of the moment, whilst interrogations were still ongoing on the same subject, Mr. Nketia stood up to read from his statement, an Exhibit in his witness statement as had been requested by the cross-examiner, Lawyer Amenuvor.

At this point, he was reminded by a member of the Judge that he could sit and make his presentation to which he responded, “I’m comfortable, I’m a teacher My Lord,” was his response, again to the amusement of everyone in the court room.

Mr Asiedu Nketia is fast gaining a reputation of dousing the flames of tension during Court proceedings after first doing so during the 2012 election petition.