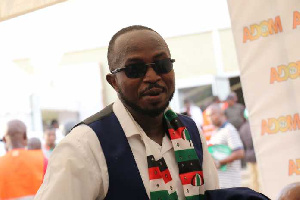 A member of the National Democratic Congress’ communication team, Mr. Stephen Atubiga has ditched the biggest opposition party in Ghana.

“I’ve resigned from the NDC, I’m no more a member of the party and officially, I’ve put out a release and the party’s copies would be dropped on them today”, Mr Atubiga announced on Class91.3FM’s Class Morning Show on hosted by K.K. Kwarteng on Friday, 21 May 2021.

He said the “party hasn’t received its copy yet but I’ve resigned from the NDC, I’m no more a member of the NDC party”.

Mr. Atubiga, who was suspended by the NDC some weeks ago, said: “I can give a thousand and one reasons why I had to leave.”

He said he is liaising with some stakeholders of the party as well as cadres, foot soldiers and grassroots people to “break away” and “form” another party because the vision and the ideology of the NDC “at this moment,” are misdirected.

Mr. Atubiga said he is the founder and leader of the new party, called the National Liberation Congress Party, which he envisions to be a third force.

In his view, were the late Jerry John Rawlings alive today, he would have endorsed the breakaway and formation of the new party, since, in his estimation, the current leaders of the NDC are not driving the party in the direction envisaged by the late former president who founded it.