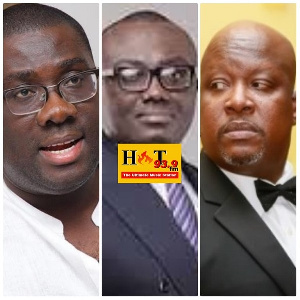 The National Organizer of the ruling New Patriotic Party (NPP),Sammi Awuku has made a shocking revelation in reaction to the alleged bribery video involving President Akufo–Addo.

The video captures the President allegedly receiving a $40,000 bribe from the Executive Director of Urban Roads, Alhaji Abass Awolu.The video has been widely circulated on social media platforms with accusations being levelled against the president.

Sammi Awuku in reaction to this on Asempa FM, a popular radio station in Accra debunked the allegation by indicating that the President can never be bribed with $40,000.

According to the NPP Stalwart,” When I was going for my national youth organizer position, those who gave me money and printed T-shirts to support my campaign are Kwame Sefa Kai and Bola Ray. These are not political activists who support any party, so does that mean I am being bribed?

Sammi Awuku advised the National Democratic Congress(NDC) to take the elections seriously because Ghanaians are discerning and will not fall for any Propaganda.

Previous VIDEO: Chief abandons stool to contest in parliamentary elections
Next Policeman run over and killed by a reckless driver