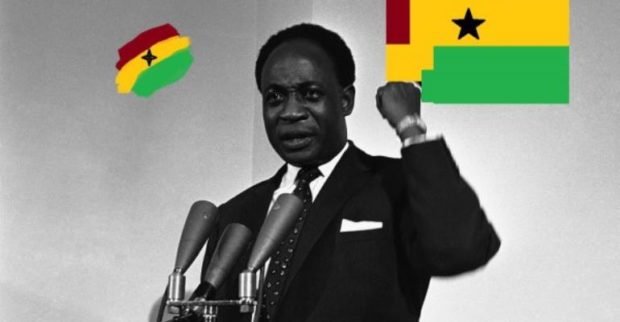 There were deep emotions at the Kwame Nkrumah Memorial Mausoleum in Accra on Monday, when the leadership of the Convention People’s Party (CPP), tearfully prayed for absolution on tomb of their ancestor on his 111th anniversary.

After the Chair and Leader had led the procession to the tomb, she led the celebrants in to place the flowers she distributed, and invoked the spirit of selflessness and dedication the founding President of Ghana exhibited, urging all to go by that commitment to bring victory to the party at the next general elections.

She said a vote for the two major parties- the governing New Patriotic Party (NPP) and the opposition National Democratic Congress (NDC)- is a wasted vote as the two had put up a poor show in the 28 years of Ghana’s Fourth Republic.

It is only when one votes for the CPP that one has voted for one’s self to ensure that the CPP brings the needed accelerated development to Ghanaians, she said.

CPP Flagbearer Ivor Greenstreet sent a caution to the two major parties that the CPP would give them an epileptic shock at the next elections.

The celebrants then sang Happy Birthday to the First President and Prime Minister of Ghana, and later sang party songs a “ There’s Victory for Us in the Name of CPP”, “Forward Ever, Backwards Never”

Nana Jantuah’s prayer acknowledged the ills committed against Nkrumah, and declared that “whatever we did, we did not know. So forgive us.”

She then admitted that to the CPP, September 21, still was Founder’s Day, a change of the title of the day from Founder’s to that of Kwame Nkrumah Memorial Day, by the current political Administration that Kwame Nkrumah was not the only Founder of Ghana.

This was followed by a warm embrace between the CPP Chair and the General Secretary.

Earlier, a ceremony was held at the park which was addressed by leading members of the party, including the Flagbearer, at which they urged the Ghanaian electorate to give the mandate to the CPP to better the lot of Ghanaians.

“A vote for NDC r NPP is a wasted voted,” the speakers said, and added, “but a vote for CPP is a vote for yourself. ”