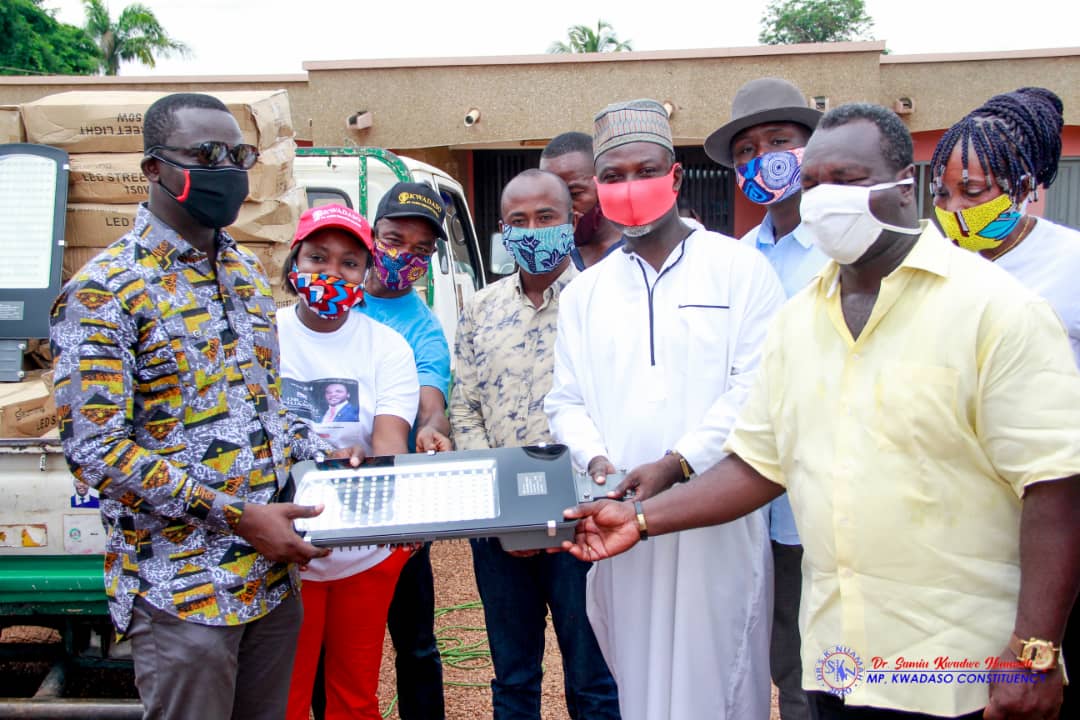 Dr Samiu K Nuamah, incumbent Member of Parliament (MP) for Kwadaso on Monday presented 150 pieces of complete streetlights and 1500 bulbs to the 15 communities in the famous constituency in the Ashanti Region.

The MP had earlier on presented 30 complete streetlights to the authorities at the University of Education, Winneba-Kumasi campus (UEW-K) which is in the Kwadaso constituency.

These donations, the MP noted forms part of his resolve to make the Kwadaso constituency a beautified crime free constituency.

Presenting the items at a brief ceremony in the presence of the Municipal Chief Executive (MCE), Municipal Coordinating Director and the Presiding Member at Kwadaso, Dr Nuamah pledged his commitment to make the constituency a developed one.

“I am committed to making Kwadaso a lighted community and a crime free community hence this donation and I am hopeful that all elected assembly members would join me to make the 15 communities secured and developed”, Dr S.K Nuamah intimated.

Overwhelmed by the gesture of the MP,  Mr Agyenim Boateng, MCE for Kwadaso expressed his gratitude to the incumbent legislator.

He noted that the donation of streetlights and bulbs to communities within the constituency was a timely gesture.

According to the MCE, the gesture takes away the pressure from government and the Municipal Assembly to provide same for the 15 communities, adding that the Assembly can now use the funds they should have used for streetlights for other useful ventures in Kwadaso.

He commended the MP for showing the way and urged other MPs to emulate same so as to compliment government efforts in securing prosperity and development for the people of Ghana.

Speaking at the ceremony on behalf of the 14 other elected assembly members, Frank Awuah(Tagor), assembly man for the Apire-Nwamasi electoral area commended the MP for the gesture.

He noted that the streetlights would help prevent the petty thievery that goes on in dark places in the Kwadaso community.

Mr Awuah said he was not surprised about the popularity of the MP amongst the people because such periodic donations and support was commendable.