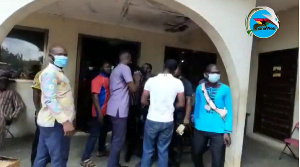 It has been one wild event or the other after the confirmation of some MMDCE nominees of President Addo Dankwa Akufo-Addo.

The confirmation of some of these nominees presented by the president were done today and whilst some of them were successful, others came with their own set of drama.

It’s either assembly members were aggressive following the rejection of their preferred nominee or curses were flowing.

At Wa, in the Upper West Region, for instance, there was a bit of chaos after the Upper West Communication Director for the New Patriotic Party who was nominated as DCE by the president was rejected.

Whilst they were rushed to the Wa West District Hospital for treatment, outgoing DCE, Edward Laabiir had to be whisked away by the police to safety or risk being attacked by aggrieved supporters of Ali, the rejected nominee.

Ali Bukari, however, has another opportunity to be re-nominated by the president after 10 days.

In the Assin South District in the Central Region, some aggrieved assembly members didn’t fail to register their anger by invoking curses on the newly confirmed DCE for the area and some others for denying them their rights to participate in the voting exercise.

According to a Joynews report, the group of assembly members had gathered with a sheep, a crate of eggs and bottles of schnapps Thursday morning. They were visibly angry and evoked the wrath of the gods of the land upon the DCE who they accused of conniving to deny them of their voting rights.

They also cursed some officers and some officials of the Ghana Police Service and the Electoral Commission.

According to them, the elections were held on their blind side in favour of the DCE, though they ought to have been part of the process as elected assembly members.

The report furthered that the aggrieved assembly members revealed that the venue for the elections – Nsuaem Pentecost Church where it was previously held was changed to one Methodist Church in Assin Nkran without their knowledge.

Upon arrival on Thursday morning to exercise their franchise, they realized there was no activity. It even got worse when they got to the new venue after being hinted, and realized police personnel at the venue refused them entry.

In all, 15 out of 36 of them were prevented from entering whilst the 21 remaining persons voted, making 2/3 of the members needed.

With a 100% endorsement, Akufo-Addo’s nominee, Felicia Amissah was confirmed. In their anger, they slaughtered a sheep, smashed eggs, poured libation and invoked curses, calling on the gods to avenge the injustice.

Journalists on Tuesday, October 5, 2021, were prevented from covering the confirmation of the president’s nominee for the position of Municipal Chief Executive (MCE) in the Atebubu-Amantin Municipality of the Bono East Region.

The Municipal Assembly Hall, the venue for the confirmation of Edward Owusu became chaotic as media practitioners tried fruitlessly to bulldoze their way to the hall but security operatives and sympathizers of the New Patriotic Party (NPP) will not yield and asked them to back off.

Tempers at a point flared up, compelling some of the journalists to openly engage in heated arguments with the security men who still stood their grounds and insisted that they were acting on strict instructions.

Although media men from Joy News, UTV, Adom TV, Citi TV/Citi FM, Star FM, Atoobu FM, and other media houses tried, the hall was still a no-go area for them.

Some of them had to be accosted from the place by the security men as there were fears things could escalate and it was clear that the presence of the media was not welcomed.

Calm was later restored and voting proceeded with Edward Owusu securing 43 out of 45 votes representing 95.56 percent to be confirmed.

The former Member of Parliament for Okaikoi North Constituency polled 33 ‘yes’ to confirm her nomination for the position.