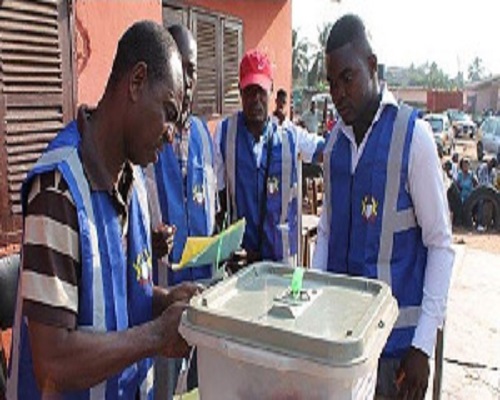 Some temporary officers who worked as Exhibition and Verification Officers, as well as Covid-19 Ambassadors for the Electoral Commission (EC) in the 2020 voter register compilation process, have accused Upper Manya Krobo EC staffers of harassing and forcing them to pay ‘appreciation’ fee.

According to the temporary officers the Upper Manya Krobo District EC staffers, especially the Returning Officers, have been on their necks ever since their allowances were paid on January 14 to come and pay a quoted ‘appreciation’ fee for the opportunity offered them to be temporary EC officers.

One of the aggrieved persons, who preferred to be anonymous, in an interview with GhanaWeb complained that “that dubious act has been going on in the Upper Manya District EC office since 2012 and we do not know why and what exactly the office is demanding the money for.”

“I am a victim; I have been a victim. And I’m still a victim for some time now. Normally what they do over here is that after recruiting you, after every work you have done, and the monies come, they give you a quota to pay; an amount. So, for instance, if recruited an electoral officer, there is an amount you pay.

“This year the officers are requested to pay GHC80, formerly we were told it was GHC100 but they have reduced it to GHC80. And then the COVID officers too they are paying GHC30, formerly they were charged GHC50.

“The issue is if you decide not to pay, the next exercise they will not employ you again. They will never pick you; they will delete your name from the list. That is what is going on.

“In 2012, I worked with them but I told them point-blank that I was not going to pay; because I don’t know how much they were giving to Afari Gyan or how much they had paid to Afari Gyan before he employed them, so I am not going to pay. Since then, they deleted my name. It was just last year that I was picked and that one I had to beg severally before I was picked,” the aggrieved officer said.

Another aggrieved member, pleading anonymity, expressed that “Upon all these hectic jobs done, after the exercise they demand “Thank you”. If you want ‘thank you’ from me then I have to decide what I want to give you as ‘thank you’, but you don’t give me a quota… and that if it is less than that you will not pick me again.”

When asked if he had paid his ‘appreciation’ fee, he said, “I have not paid yet but people have paid. They are calling people and demanding their money. It is something that is happening live and coloured. It is even on the EC platform. I am not on it but when my colleagues got it they took a screenshot and forwarded it to me.”

The Upper Manya District EC Director, Gifty Ansah, when contacted, confirmed that there was such an ‘appreciation’ fee demand system in her office.

“You see, this thing, it is a normal thing they have been doing. Almost all the officers do it. You see, after the work, they have to sit down and compile all the lists, get bank account numbers, voter IDs, a whole lot. So, it is a norm. but the actual amount I don’t know. I have even told them not to charge them too much. They should give some tokens or something.

“When Adom (a staffer) called me that they wanted to charge GHC100, I talked to them that they should reduce it. This thing is nothing. You see, for them too, it has become their (motivation) to work. You see, the work is not easy oo. If somebody will be bold to tell you, they are taking it throughout Ghana. The only thing is that I will tell them to reduce it,” she said.