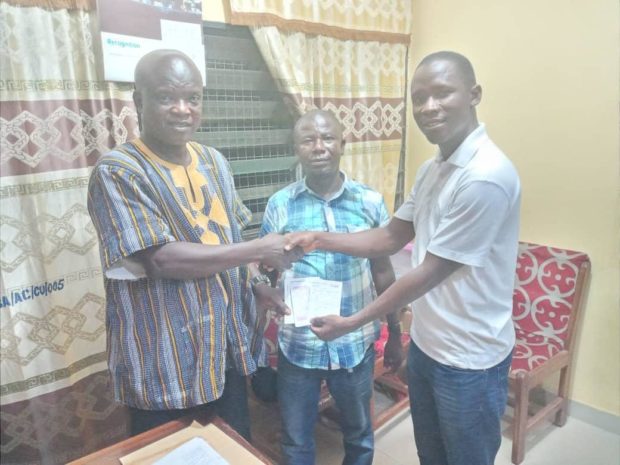 As part of efforts to ensure victory for the New Patriotic Party ,Mr Prince Akyereko, who is the Youth Organizer for NPP Canada Branch, has donated GHS 4000 and GHS 1,000 to support Sunyani West Constituency and Bono Regional Youth Wing ahead of the 2020 general elections just like he did in 2016.

He made the donation to the leadership of Sunyani West Constituency and the Bono Regional Youth Wing of the New Patriotic Party, NPP, to continue to proclaim the good work of the party in government. The cash allocation was 4000 Ghana Cedis to Sunyani West Constituency and 1000 Ghana Cedis to the Bono Regional Youth Wing respectively.

The philanthropic gesture made by the NPP Canada Youth commander was to aid the NPP executives in their campaign activities for election 2020, just as he did in 2016 elections.

They presented the donation at the constituency office on Tuesday, November 3, 2020 in the presence of Member of Parliament, Hon Baffour Awuah, constituency chairman and organizer as well as other constituency executives.

Mr Akyereko’s message which was relayed to the executives, tasked them to work diligently and campaign more on the government flagship programme so that the party can win once and massively.

He was also of the view that, NPP government has done a lot in their first term which the public should consider and vote for the party another four years.

Mr Abdul Razak Oppong who received the 1000 Ghana Cedis donation on behalf of the Youth Wing, thanked Mr Akyereko for his contribution and promise to put the money to good use.