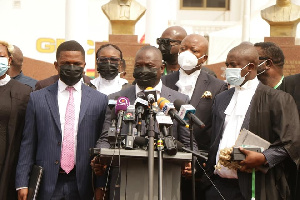 Robert Joseph (Rojo) Mettle-Nunoo, one of the representatives of the petitioner in the ongoing Election Petition at the ‘strongroom’ of the Electoral Commission (EC), has disclosed that he was misled by some officials at the EC office to sign collation sheets which were certified by his party’s polling agents.

In his witness statement submitted to the Supreme Court on Thursday, February 4, Rojo Mettle-Nunoo indicated that he found out from his party officials at the party’s headquarters that the figures presented on the signed documents were not what had been collated.

Rojo Mettle-Nunoo averred in paragraph 10 of his witness statement that when he was at the EC headquarters as a rep for the NDC, some EC officials were telling all-party reps that, “they were correcting errors” on the collation sheets that have been sent to the EC headquarters from the regional collation centres the EC had established.

“At certain times, when we queried certain collation results from the regional levels, they were quick to say, once your representatives have signed, the only relief available to you is to go to court,” parts of his statement read.

Rojo Mettle-Nunoo further stated in paragraph 11: “I must admit I was misled by this position of the EC officials into signing the regional collation sheet for the Ashanti Region simply because there was a signature of the agent of the Petitioner at the regional collation centre on that sheet. I later found out from speaking with officials at the party headquarters that what had been presented on the signed collation form was not consistent with a tally of polling station results in the Ashanti region.”

Again, Rojo, averred that the NDC party’s representative in Western North Region did not sign the summary sheet for the Petitioner and gave reasons to the NDC as to why he did not sign and it was duly noted.

However, he, Rojo Mettle-Nunoo, made a mistake by signing that summary sheet in the EC’s “Strong Room”.

He continued: “…in any case, officials of the EC being aware of the reason given on the form by the agent of the Petitioner for not signing, could not just disregard it and claim that, once I had signed the summary sheet, the matter was closed”.

He argued that the fact that they signed the results, even including errors, should convince the court that they were not at the EC strongroom to put “spokes in the wheel of the process of getting the proper basis for a constitutionally appropriate declaration of the results of the presidential election to be made”.

John Dramani Mahama, who was the flagbearer of the NDC is disputing the election results as declared by the Chairperson of the Electoral Commission on December 9, 2020.

He has already presented two of his expected five witnesses: first Johnson Asiedu Nketia, NDC General Secretary, appeared for two days, and then Dr. Michael Kpessah-Whyte, Mettle-Nunoo’s colleague at the ‘Strongroom’, both of whom were cross-examined by the lead counsels for the 1st and 2nd Respondents.

On Wednesday, February 3, 2021, the lead counsel for the Petitioner, Tsatsu Tsikata, prayed the court to allow them to file a new witness statement.

He explained that the new witness had some health complications and due to the confidentiality of the witness’s condition, he would prefer that the court hears the reasons in camera. It is not clear yet whether Rojo Mettle-Nunoo is that witness, and whether he will appear in open court.

Find below the full witness statement of Rojo Mettle-Nunoo:

Battle for NPP chairmanship: Who gets government support?