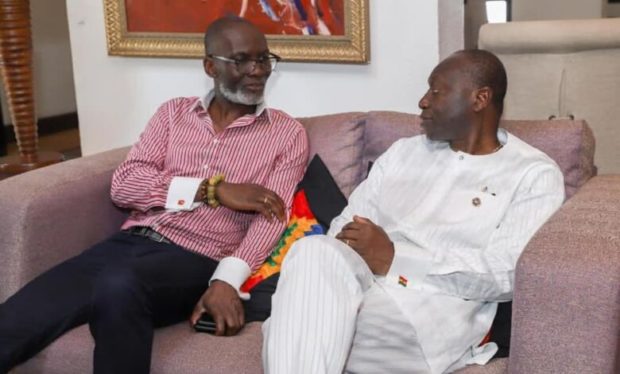 According to him, the Minister he describes as fighting to make Ghana better knows only his wife after they got married.

He made this known while wishing him a happy birthday.

Apart from being a faithful husband, the Finance Minister according to Gabby donates his salary to charity in order to give the needy a befitting life.

Read What He Wrote Here “happy birthday to one of the most decent patriots ever to be born to this land, Ken Ofori-Atta. His is an inspiring story; a patriot who believes in Ghana, and continues to work to manifest that destiny of fulfillment, which inspired his forebearers, of a free, prosperous, progressive Ghana which offers security and opportunities for every odehye (each and every citizen) of our rich land. Ken returned to Ghana 30 years ago to form Databank with two other returnees, Keli Gadzekpo and James Akpo, with a loan of $25,000.

Today, Databank, which started in a small room in Katamanto, Accra, manages $1 billion of funds for 500,000 Ghanaians and growing. He became Finance Minister in 2017, at a time that the economy was in a bad state and under the necessary but austere grips of the IMF, registering the lowest growth since 1990, with the John Mahama government losing control to unemployment, macro-economic instability, and low business and consumer confidence. It was that bad that even contractors, who made exceptional profits from the NDC administration, were busily and openly donating to the NPP to see to the back of John Mahama, as they saw the millions they had made fast disappearing with the winds of economic mismanagement.

But, with a can-do, must-do spirit, discipline, integrity, creativity, network, hard work, and support from a committed team and visionary and uncompromising direction from the presidency, Ken has managed the recovery of the economy, even with the unprecedented stress from Covid-19. The future is ours to grow. He has more than pay the bills, including over GHS100 billion being the cost of the mess (11bn of arrears, 19 billion a year servicing interest payments, 21 billion to rescue banks, etc.) left behind by the previous government, paid salaries on time, even after putting 100s of thousands more workers onto the public sector wage bill, and still found the money to fund flagship programmes like Free SHS and Planting for Food and Jobs, offered billions in social reliefs, including free water, cheaper electricity, and seen to the most broad-based infrastructural development nationwide (from railways to private toilets) ever undertaken under any head of state in this country.

Ken’s basic principle is deriving the greatest value for money for Ghana under any circumstances, whiles understanding that people do business to make profits. He guards the public purse with calm but stern integrity. As Finance Minister, Ken refuses to take home his own salary, all of which he donates directly to the charity. He does not accept personal gifts (which every businessman knows). And, oh, he does not even have a girlfriend besides Prof Angie, his wife. Don’t be perplexed! He is 100% Ghanaian. Ken is a model family man and a Christian who lives by the Word and enjoys doing so. Happy birthday to my best friend and senior brother, Ken!