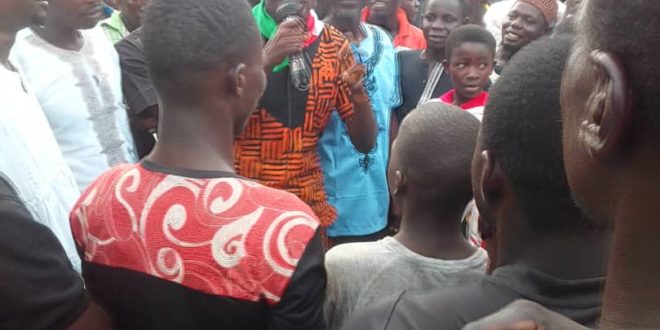 A former Parliamentary candidate for the Progressive People’s Party (PPP) for the Salaga North constituency in the Savannah Region in the 2016 election Mr Abdul Wahab has defected to the opposition National Democratic Congress (NDC).

Mr Abdul Wahab made the declaration during the Presentation of forms to the Salaga North constituency office of the NDC at Kpalbe by the Member of Parliament for the area Hon. Alhassan Mumuni.

Speaking to a large number of party faithfuls who accompanied the Honourable MP to file his nomination to be re-elected as the NDC parliamentary candidate for the 2020 general election, Mr Abdul Fatawu Abdul Wahab who doubles as the Assemblyman for Dabogshee electoral area in the North East Gonja District urged all sympathisers and well-wishers of PPP in the constituency and across the country to join the NDC for victory 2020 since the NPP has woefully failed to deliver on their mandate.

He said his defection to NDC is as a result of the good policies of the party and the massive infrastructure development in Ghana and his constituency during the eight years of NDC in governance.

Mr Abdul Wahab further pledged to work very hard to ensure the return of the MP for the Salaga North constituency, Hon. Alhassan Mumuni and increase the votes of John Dramani Mahama in the constituency to propel him to victory.

The Salaga North MP Hon. Alhassan Mumuni Mumuni thanked the former PPP candidate for joining the NDC and urged him to spread his message across to bring onboard members of his party to the NDC towards victory 2020.

Previous Accra Police educate students on kidnapping, defilement
Next Government Has Failed In The Fight Against Illegal Mining – Mining Engineer