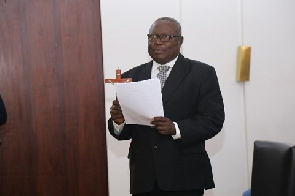 Full list: All 26 cases at Office of Special Prosecutor

Here is a list of 26 cases receiving attention at the Office of the Special Prosecutor obtained by JoyNews.

It includes opposition figures as high profile as former President John Mahama and government appointees under the Akufo-Addo administration such as Board Chair of the Ghana National Petroleum Company and national chairman of the governing NPP Freddie Blay.

The Special Prosecutor, Martin Amidu, has so far filed one case in court among the 25 cases which have piqued his interest.

The office, which is the President’s promised solution to political graft, was created by law in 2018.

Martin Amidu is a former Attorney-General who resigned from the John Atta Mills’ administration and made a name for himself in chasing after ill-gotten funds while a lackadaisical state pussyfoots.

He was sworn in as the first Special Prosecutor on March 1, 2018, with a secured tenure which is believed, will protect the appointee from political interference which is said to have undermined the fight against corruption.