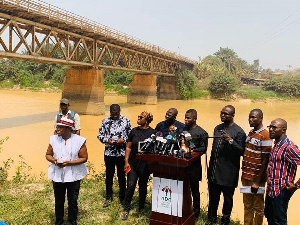 The National Democratic Congress (NDC) Sunday evening tended to issues with respect to galamsey at a question and answer session in the Central Region.

Having visited the region and seen the dirtied condition of the River Pra, they have mounted a platform directly before the stream where Communications Director, Sammy Gyamfi tended to media people.

Below is his full text:

We have invited you to this press conference at a rather unusual venue but which serves as backdrop to our concerns about the effects that unbridled illegal mining is having on our water bodies, the ecology and general environment.

The current state of affairs reflects the failure of President Akufo-Addo’s so-called fight against galamsey. In fact, that so called fight turned out to be a ruse to kick out legal small scale miners and artisanal “galamseyers” and replace them with a new breed of marauding illegal miners belonging to the ruling New Patriotic Party and government.

The destructive manifestation of “Galamsey” being supervised by President Akufo-Addo in Ghana defeats the UN’s Sustainable Development Goals (SDG’s), which Ghana subscribes to. It is an afront to notably, SDG 6, 13, 14 and 15 which all talk about clean water, sanitation, climate action, conservation and sustainability of land, water and marine resources.

Friends from the media, it was an honour to all Ghanaians when our President, alongside Prime Minister Erna Solberg of Norway were in April 2017 made Co-Chairs of the UN’s Eminent Group of SDG Advocates, a position President John Mahama had previously held with distinction and to the admiration of the international community.

Subsequent to that appointment, in a speech delivered at the Accra International Conference Centre (AICC) specifically on July 10, 2017, our President boldly proclaimed that he was willing to put his Presidency on the line to fight “Galamsey”. He further appealed to Traditional rulers, the media and all stakeholders to support this fight.

Sadly, President Akufo-Addo, who coincidentally is a Co-Chair of the United Nations Sustainable Development Goals (SDG) Advocates, has failed to make do his solemn promise to the nation to fight the galamsey menace and protect our environment from further degradation.

Distinguished friends, the fight against “Galamsey” in the last three (3) years that is if it can even be called a fight, has exposed the duplicity of President Akufo-Addo and the hollowness of his words.

This is an evidenced-based presentation, and as such, we intend to give you both historical and empirical data to support our claim that President Akufo-Addo’s failed fight against “galamsey” was nothing but a ruse calculated to monopolize the galamsey trade for top NPP officials and their foreign collaborators.

Ladies and gentlemen, you may recall, that at a speech delivered at the 2019 Edition of the Investing in Africa Mining Ndaba, the World’s largest Mining Investment Conference in South Africa, President Akufo-Addo claimed that River Pra has cleared up and was beginning to host aquatic life again due to his fight against “galamsey”. Today, we have brought you to the banks of the Pra River, so that you can judge first-hand whether President Akufo-Addo spoke the truth to the world when he claimed the “Galamsey” fight had been won.

As you are all witnesses today, “Galamsey” has intensified to unprecedented levels in the last three (3) years, while the Akufo-Addo government continues to spend millions of taxpayer’s monies ostensibly fighting the canker.

Anyone who thought President Akufo-Addo slept on this task is mistaken. Recent revelations of the missing 500 Excavators, and the illegal mining activities of government officials such as Prof. Frimpong-Boateng, Charles Bissue, Horace Ekow Ewusi, and NPP officials, notably John Boadu and Chairman Wontumi, shows that, Akufo-Addo’s so-called fight against “Galamsey” was a sham from day one.

These latest revelations of thievery and massive corruption confirms our long held position, that President Akufo-Addo’s so-called fight against “galamsey” was a well-thought-out masterplan, designed to take over the illicit trade and inturn use its proceeds to fund the New Patriotic Party (NPP).

Ladies and gentlemen, the effects of this Akufo-Addo’s deceptive fight against galamsey, are clear and evidently devastating. On 20th January, 2020, Myjoyonline.com reported that the Ghana Water Company Limited (GWCL) has warned that the galamsey menace in the Western Region is leading to a cut in treated water to the Region. The GWCL further indicated in that report, that they lose about 40% of water abstracted before and during treatment, which meant that instead of 11 million gallons, they are only able to treat averagely 3 million gallons of water.

Also, on 27th May, 2019, ghanaweb.com reported that water crisis in Cape-Coast had worsened due to intensified “Galamsey” in the central region. Recently, ghanaiantimes.com.gh reported that the Daboase Water treatment Plant was in danger as “galamsey activities” in the area was polluting the River Pra, leading to water rationing to residents of the Amenfi East area.

Only two (2) days ago, citinewsroom.com published a heart-wrenching story under the headline: “Galamsey-polluted Pra River doubles skin diseases, diarrhoea cases in Shama District”. The story reported the Shama District Director of Health, Alfred Osei-Assibey, as saying that skin infections and water-borne diseases, such as diarrhoea, are on the rise in communities in the galamsey-polluted Pra River area. The District Director of Health further explained that, “in the last three years, skin diseases have increased dramatically. From the 5,000 cases we recorded in 2017, now we are recording over 10,000 cases of skin infections. The diarrhoea cases have also risen from 6th in 2017 and now its number 3.”

Ladies and gentlemen of the press, the ever-worsening ramifications of Government’s failed “galamsey” fight is ever so lucid and conspicuous today. The countless number of polluted water bodies in several parts of our country such as river Pra, river Ankobra, river Offin, river Birem among others, is enough testament to the fact that Ghanaians have been taken for a ride by President Akufo-Addo, who continues to supervise and promote the escalation of the illegal mining menace.

Quite characteristic of this government, even in the face of worsening turbidity of our water bodies by the day, functionaries of government still claim this government has achieved results relative to the galamsey fight. Where are the results?

Needless to say, that a huge financial loss has been occasioned to Ghana through this fraudulent fight.

In the last three years, relics such as seized gold, excavators and weapons which would have served as substantial evidence cannot be accounted for by the Inter-Ministerial Committee against Illegal Mining, yet government claims to have achieved results.

To think that some of the so-called missing 500 excavators are being secretly returned to Accra, whilst some have returned to the forests to continue the illegal activity, speaks volumes of the tragedy we have in our hands.

Distinguished friends from the media, President Akufo-Addo’s inexplicable inaction and reticence over this flagrant abuse of our environment and water bodies speaks to his complicity in this matter.

In any serious country, the “galamsey queen” Aisha Huang, and other galamsey kingpins like Charles Bissue and Andy Owusu who were indicted in Anas Aremeyaw Anas’ “galamsey fraud documentary” would have been standing prosecution by now. Yet, President Akufo-Addo has shockingly refused to crack the whip on these miscreants thereby emboldening other NPP government officials and their foreign collaborators to engage in “galamsey” with impunity. It is therefore least surprising that things have gotten this worse.

Ladies and gentlemen, posterity will hold Akufo-Addo accountable for supervising the unprecedented destruction of our water bodies and environment.

We are aware that the Special Prosecutor will soon be petitioned to investigate the latest revelations of thievery and corruption that have characterized the Akufo-Addo’s fraudulent “Galamsey” Fight. We wholeheartedly support that petition, and wish to call on the Special Prosecutor to act swiftly this time around. His lackadaisical attitude on the Anas Galamsey fraud documentary has not helped.

The NDC further demands, that the Akufo-Addo Government as a matter of urgency, should fully account for all items seized as listed at paragraph 801 of the 2020 Budget Statement presented to Parliament. We insist that a public exhibition of all 900 excavators, 2,779 weapons and ammunitions and the 4,045 other mining equipment confiscated must be held in the spirit of transparency and to the benefit of all Ghanaians. We are terrified at the prospect of all these weapons finding their way into the hands of hoodlums belonging to NPP vigilante groups in an election year.

More importantly, we hereby serve notice, that the NDC shall in the coming days, petition the UN Secretary General, Antonio Guterres, to revoke the appointment of President Akufo-Addo as Co-Chair of the SDG Advocates.

Clearly, President Akufo-Addo has failed to show genuine commitment to the fight against illegal mining and the protection of the environment in his own backyard. His corrupt government has become an active enabler and promoter of the “galamsey” menace and the destruction of the environment in a way that affronts the SDGs of the United Nations. He has proven to be unfit for the prestigious position of Co-Chair of the UN SDGs Advocates, for which reason he must be removed without delay. And, we are absolutely convinced beyond doubt, that the United Nations will act in the interest of the Ghanaian people, the international community and the environment.

Got a news item to share with us or an enquiry/complaint to make? Send an email to th[email protected]