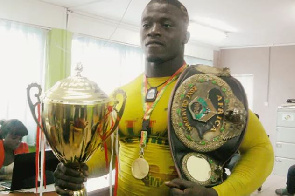 Ghana’s ‘Most Strongest’ man in 2013, Sani Mohammed is among 12 persons who has been declared wanted by the Ashanti Regional Police Command for their roles in the shooting incident at the Regional Secretariat of the opposition National Democratic Congress (NDC), MyNewsGh.com reports

Police Public Relations Officer (PRO), ASP Godwin Ahianyor who made the revelation on a Kumasi-based radio station monitored by MyNewsGh.com, revealed that they are on the heels of the suspect who was found at the premises of the party headquarters on the day of the incident.

“We now know that the motorbikes that went to the party premises was more than one and the suspects that have been mentioned so far in our investigations include one Wayo a resident of Tafo, We have gotten Sani who was once winner of TV3’s Ghana’s Strongest, we also have Ja Rule also a resident of Tafo, Element a resident of Ayigya Zongo, Petit a driver at Tafo, We have Rock whose location is yet to be known, Fayis, Akon, Mijima and Warrior”, he disclosed.

He appealed to the public to support them in arresting the suspects who are living in the communities with residents warning that those shielding them when found could be charged for the same offense like the wanted suspects.

Twelve persons including Hussein Bari alias Warrior, Midjima, Damos, Abu Taliban, Sanni Mohamed alias Commando, Wayo, Element, Jah Rule as well as Petit, Akon, Fayiz, Mallam and ‘Rock have been declared wanted following the shooting incident that resulted in the death of one person and the injuring of another said to be in critical condition at the Komfo Anokye Teaching Hospital (KATH).

But Samuel Agyin aka ROCK has revealed that he is innocent and played no role in the dastardly act wondering why his name and picture included among the suspects.

In an interview with Kumasi-based Pure Fm monitored by MyNewsGh.com, ROCK who is a barber by profession at Ahwiaa Pankrono disclosed that he is not part of the HAWKS squad alleged to have carried the dastardly action.