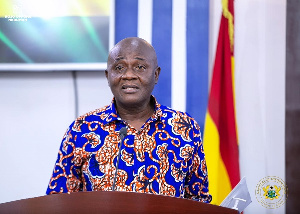 The Guan District which is made up of the people of Santrokofi, Akpafu, Likpe and Lolobi (SALL) in the Oti Region, has been inaugurated on Friday October 8, 2021.

“My special commendation appreciation goes to the joint consultative committee which exhibited high spirits of volunteerism, dedication, and loyalty to execute responsibilities, entrusted onto them,” the Oti Region Minister, Joseph Makubu, said.

The Local Government Minister, Dan Botwe, had earlier assured that the district was going to be inaugurated after the traditional area had been without an administrative district since 2019 following the creation of the Oti Region from Volta.

The people have been without an administrative district after the Oti Region was created out of the Volta Region in 2019.

Mr Dan Botwe told TV3’s Alfred Ocansey in an exclusive interview that all the necessary consultations had been done with the chiefs and other traditional rulers from all the four paramountcy.

“We have done a lot of consultations. I led a delegation to Guan myself, I chose a date and I went there, it is not as if somebody gave an ultimatum to go there.

“We have been discussing, talking because there is a peculiar situation in that area. It is important that when we are doing these things I believe in a lot of stakeholder consultations especially with the Chiefs in those areas.

“You have four paramountcy in that area so we met and one of the key people who had championed that agenda is our eminent statement Dr Obed Asamoah.

“We met and he was also involved, and all the chiefs. I remember we asked each of the four traditional areas to speak and confirm whether there are ready for the inauguration and they all spoke and said they were ready for it.”