struc I am beginning to feel disappointed in Akufo-Addo’s presidency – Prof. Lumumba - Home Of Ghana News 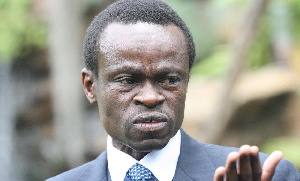 • Prof. Lumumba has expressed his disappointment in the presidency of Akufo-Addo

• Prof. Lumumba recounted a number of scandals that he believes has tainted Akufo-Addo’s presidency

According to him, Akufo-Addo begun his tenure with a lot of zeal to uplift Ghana towards a much sustainable and well-developed nation but that enthusiasm he says, has now been plagued by mismanagement of the country by the President.

“The problem with our leaders is that if you see good in them, they disappoint you very quickly and there is a sense that I’m beginning to feel disappointed in President Akufo-Addo,” Professor Lumumba stated.

Making the comments in an interaction on Zoom with Maxwell Nkansah monitored by GhanaWeb, the Director of the Kenya anti-corruption Commission recounted a number of scandals that he believes has tainted Akufo-Addo’s presidency.

He bemoaned the stance of the parliament of Ghana seeking to approve payment of salaries to the spouses of the president and vice president.

“When I see Members of Parliament going to parliament and saying the President’s wife deserves an allowance then I know the man whom I thought had great ideas is now down the periscope. That is my unfortunate verdict as I speak,” Professor Lumumba added.

Prof. Lumumba added that the infamous FixTheCountry demonstration which saw a large number of youth take to the streets to protest the living conditions under President Akufo-Addo is also one to wonder about.

Though he commends President Akufo-Addo for still having an intellectual power of leadership, the recent happenings in Ghana does not culminate towards a good perception of the country.

“He started very well. He had ideas talking about industrialisation in every district, he said he will look for Ghana beyond aid. The rhetoric was right but now as I watch him consistently, I’m beginning to see a mismatch between rhetoric and action.”

Prof. Lumumba however said President Akufo-Addo still has an opportunity to redeem himself of these predicaments which has plagued his presidency.