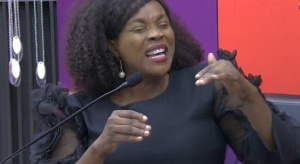 Embattled General Secretary of the Peoples National Convention (PNC) Janet Asana Nabla has threatened to face off squarely with the party’s leader, David Apasera, who is said to have ordered some men to lock up the PNC headquarters in Accra.

Ms Nabla said the 2020 flagbearer of the party is using men from his hometown, Frafras to be precise, to cause mayhem within the party but her efforts to get the police to act have yielded little results.

“Let the security people be quiet. Let the politicians be quiet. You are dealing with a potential coup plotter who is capable of causing coup and mayhem in this country and everyone is keeping quiet.

“You continue to keep quiet.”

Ms Nabla, who was suspended by a decision said to be spearheaded by the former Bolgatanga Member of Parliament, said she will not be cowed into silence by his actions.

“Me, I will come out because wherever he is passing, whatever measures he is going to use, I will use same measures.

“Today, I am at the police station, I am doing the right thing to follow the processes. If the police are not ready to help me, I will take matters into my own hands.

“Those small, small boys that he has, I have boys from Walewale who are well-built, macho. They are terrorists and they can terrorise this country and you will run into your rooms and won’t come out.

“I am giving peace a chance for the police and our security forces to stop being partisan and be impartial because at times you send your case to the police station and because money has exchanged hands, they won’t give you justice.

“If justice is not given to me and he continues to do what he is doing, preventing me the legal person that the National Executive Committee has entrusted in my hands.”

Ms Nabla was at the Kotobabi Police Station in Accra to file a complaint about Thursday’s lock-up of the party’s offices.

But she said if the police refuse to despatch officers to provide protection, she will know what to do next.

Do or Die Comment: NDC do not owe anyone an explanation or Apology