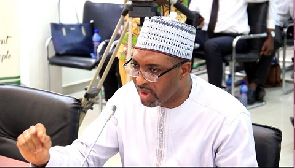 Minority Chief, Hon. Mohammed Muntaka Mubarak has revealed that he will not hesitate to drag controversial lawmaker for Assin Central Constituency, Kennedy Agyapong before the privileges committee of parliament if it is found out that he has once again said things that undermine the reputation of the house.

He told Kwame Adinkra on Kumasi-based Pure Fm that the New Patriotic Party (NPP) firebrand is not his friend and has never been throughout his 15-year stay in the legislature.

The Asawase lawmaker disclosed that he has nothing personal against him but will not sit aloof and allow someone run down the reputation of the honourable house and also expects same to be done to him if he goes contrary.

“On my relationship with Hon. Kennedy Agyapong, he is not my friend and hasn’t been for the past 15 years I have been in the house. I don’t want to be a part of his circle. I don’t take things personal but if he sits somewhere and say something that affects the reputation of parliament, I will take it to the floor. I don’t have anything personal against him and I expect same to be done to me if I don’t behave well. We should all learn to manage our weaknesses”, he disclosed.

It would be recalled that Alhaji Mohammed Muntaka Mubarak earlier this year, dragged Mr. Kennedy Agyapong before parliament’s privileges committee over the latter’s comment on claims that parliament is cheap as well as those on late Anas protegé Ahmed Hussein- Suale the second time Muntaka would’ve done that against the Assin MP

But after Kennedy Agyapong was asked to apologise for his comments on the floor of parliament, Muntaka expressed disappointment about the ‘go and sin no more’ acquittal of his ‘archenemy’

The Speaker of Parliament, Prof. Arron Mike Oquaye reprimanded Kennedy Agyapong after his apology for referring to the house as “Cheap” as MyNewsGh.com reported.

Kennedy Agyapong admitted that he erred back in June 2018 for the utterances concerning the Majority leader and said he has apologized.

Mr. Agyapong subsequently apologized when he was given the opportunity to speak but not without some drama. He rejected some aspects of the committee’s report while explaining the circumstances under which he used words deemed as slighting Parliament.