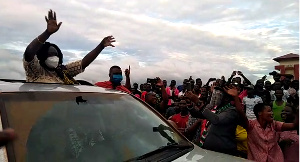 Students of the Kanjaga community Day Senior High school in the Builsa South District Saturday evening couldn’t hide their emotions, after they thronged the area in their numbers to welcome Prof. Jane Naana Opoku Agyemang.

The NDC Running Mate was in the area as part of her tour of the Upper East Region.

The students, a huge number of them, in their jubilant moods, mobbed the entourage of Prof. Opoku Agyemang, demanding for an address from the latter before they disperse.

Not even the decision of the Vice Presidential Running Mate to remain in her vehicle stopped the jubilant students from pursuing their demand.

They would not even budge when Member of Parliament for the area, Dr. Clement Abas Apaak tried explaining to them that time constraints wouldn’t allow for their requests to be met at the time they were asking.

Alex Segbefia, the former Minister of Health and Deputy Campaign Manager of the party for the 2020 elections also stepped out of his vehicle to join in persuading these students.

It took an eventual assurance from Prof. Opoku-Agyemang who emerged from the top of her vehicle to calm the over excited students.

Her team told the students she would return to the school at the right time to address them.

The Kanjaga Community Day Senior High School was one of the community Day schools Commissioned by Former President Mahama.

The Builsa area was the last destination of Prof Opoku-Agyemang’s tour of the Upper East Region. She paid separate courtesy visits to the Builsa Paramount Chief and Kanjaga Chief.

She addressed the Chiefs pledging to accelerate and sustain development in the area.