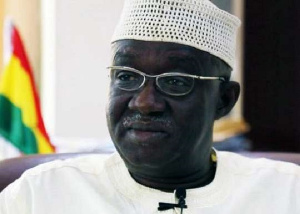 • Autopsy report states that he died of heart failure

• Kofi Adda was the former minister of Aviation

In the said report sighted by GhanaWeb, a source confirmed to the news portal that an autopsy report carried out at the Ga East Hospital confirmed the cause of death of the politician.

“An autopsy has confirmed that he died of heart failure,” the report said.

Joseph Kofi Adda, who is the immediate past MP for Navrongo Central in the Upper East Region died at the age of 65.

He died in the early hours of Thursday, October 14, 2021, on arrival at the Legon Hospital.

The late minister, according to reports had been battling with ill-health for the past few years.

He wrote on his official Facebook page, “I am shocked and very saddened by the news of the sudden death of my friend, the former Minister for Aviation and former Member of Parliament for Navrongo Central, Hon. Kofi Adda. I extend my deepest condolences to his wife and family for their loss, and pray for God’s strength for them in these difficult times.

“Kofi Adda will be missed, and will be remembered for his diligence and forthrightness. May his soul rest in perfect peace. Amen.”