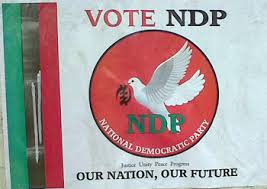 The National Democratic Party (NDP) says it is targeting to win 15 out of the 47 parliamentary seats in the Ashanti Region in the 2020 general elections.

The party founded by former First Lady, Nana Konadu Agyeman-Rawlings says members who picked nominations to contest for the parliamentary seats have begun engaging constituents ahead of the elections.

NDP has also inaugurated executives to steer its affairs in the Ashanti Region ahead of the elections.

The Ashanti Regional Youth Organizer for the party, Abdul-Rashid Muslim spoke to Citi News said the party saw some opportunities in the targeted constituencies.

“Those constituencies are looking for the party that will represent equally and serve them right because they cannot believe in the other political parties; either the NPP or NDC.”

“Hopefully we will do it and get those seats, Insha Allah,” Abdul-Rashid Muslim said.

But beyond the Parliamentary level, the Party has eyes on the Presidency.

It found itself on the presidential ballot for the first time in 2016 with Ghana’s first woman Presidential candidate and secured 0.16 percent of the vote.

Abdul-Rashid Muslim noted that “every political party target is to win the general election, but we are also targeting the seat the president is on.”

Despite the threat of the National Democratic Congress and the New Patriotic Party, he said the NDP was not deterred by the strength of the two main parties.

“The fact that all of us are running the same lane or the same system, we can also see ourselves as a big political party.”