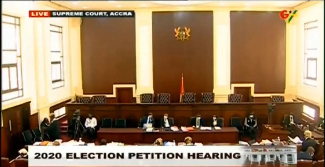 This follows the adjournment of the hearing on Wednesday, February 3, 2021.

The case was adjourned after the lawyers for Mr. Mahama requested an in-camera hearing on the status of one of their witnesses due to ill-health.

However, a third witness of the petitioner Mr. Robert Joseph Mettle Nunoo, on Thursday, February 4 filed his witness statement at the Supreme Court to enable him to testify in the case.

The statement was filed on his behalf by the petitioner, Mr. John Dramani Mahama.

In his 39 point statement, the representative for the petitioner highlighted his role in the strong room of the EC, his various interactions with the Chairperson of the Commission, Jean Mensa, and other officials during the electoral process.

He is set to be cross-examined by counsels of the EC and President Addo Dankwa Akufo-Addo today.

Mr. Mettle-Nunoo became critical in the petition after the second witness, Dr. Michael Kpessa-Whyte, during his cross-examination, said the former minister was instructed by the Chairperson of the EC, Jean Mensa, to go and consult with Mr. Mahama over some grievances.

Former President John Dramani Mahama is currently at the Supreme court challenging the verdict of the 2020 elections which declared Nana Akufo-Addo as President.

The Electoral Commission (EC) declared President Nana Addo Dankwa Akufo-Addo of the New Patriotic Party (NPP) the winner of the 2020 polls, however, Mr Mahama disagrees with the figures put out by the Chair of the Commission.

John Mahama, the National Democratic Congress (NDC) Presidential Candidate is therefore seeking a rerun of the election because he believes no candidate won the polls.

The court is expected to hear the case and give a ruling within a period of 42 days.