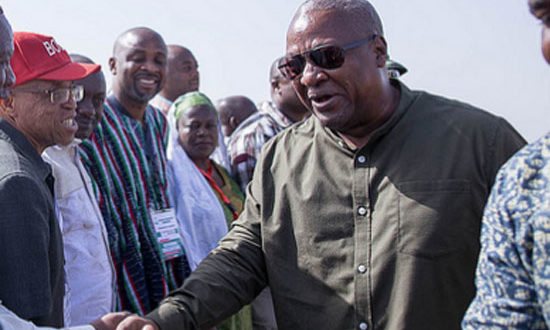 Former President John Dramani Mahama has indicated he is deeply touched by the overwhelming endorsement he has received from the grassroots of the National Democratic Congress (NDC).

In a victory speech Sunday morning after he secured a 95.23 per cent endorsement to lead the NDC to Election 2020, Mr Mahama said it was a “call to duty and a call to action.”

“Our party has spoken with one voice and I must say we are all winners,” he said.

“I am deeply touched by the overwhelming endorsement I have received from the grassroots of our party.” he said moments after the Electoral Commission declared the official results at the NDC’s headquarters at Adabraka in Accra.

Mr Mahama thanked the fellow aspirants for the fight they put up in the presidential primary and indicated they have helped to energise “the base of our party. Their participation in this contest has exhibited that our party is the most democratic, peaceful, transparent and dynamic in Ghana’s democracy today.”

Click the play button below to listen to flagbearer-elect John Mahama after the results were announced.

Mr Mahama dedicated the victory to the grassroots of the party and said the “party has spoken with one voice.”

The certified results from the Electoral Commission indicate that former President John Dramani Mahama secured 95.23 per cent endorsement, to lead the National Democratic Congress (NDC) as flagbearer to Election 2020. 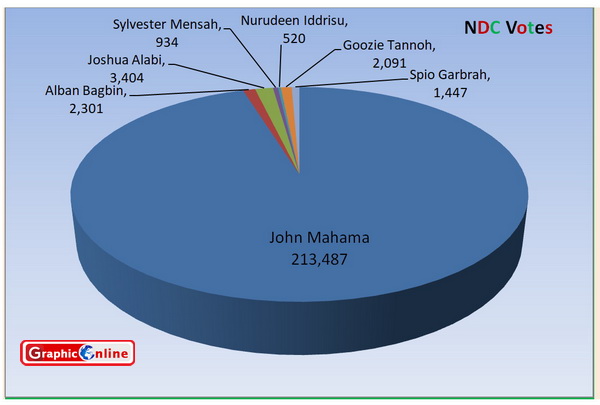 Mr Mahama polled 213,487 votes representing 95.23 percent of the total valid votes cast with the other six contenders managing with about 4 percent.

Coming second was Professor Joshua Alabi who had a total of 3,404 votes representing 1.52 per cent.

The Second Deputy Speaker of Parliament, Mr Alban S.K. Bagbin followed in third position with a total of 2,301 votes representing 1.03 per cent.

Goosie Tanoh came fourth with a total of 2,091 votes representing 0.93 per cent.

Mr Ekwow Spio Garbrah was fifth with 1,447 votes representing 0.65 per cent as against 934 votes by Sylvester Mensah in the sixth position representing 0.42 percent.

Alhaji Nurudeen Alhassan was seventh with 520 votes representing 0.23 per cent.

“Tonight I want to serve notice to government, that with the outcome of this election, the NDC is strong, the NDC is united, the NDC is poised for victory in 2020 and that nothing, absolutely nothing, will stop our march towards the Flagstaff House,” he said.