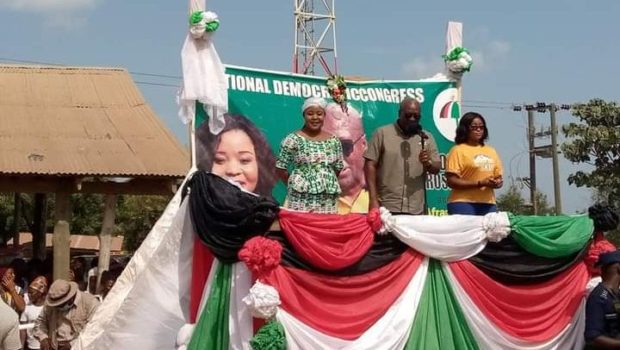 Former President John Dramani Mahama who is begging for votes to return to power on Sunday stormed the strongholds of the NDC in the Eastern region that’s Donkokrom and Tease both in the Afram Plains North and South constituencies of the Region.
This time around, the former president was visiting the place by using the road without a chopper.

Mr Mahama now opposition leader crossed the Volta Lake with the ferry from Adawso to Ekye – Amanfrom and used the road to Donkokrom, unlike 2016 when he traversed the area by using a chopper during his regional tour due to the bad nature of the road network in the region, which he claimed were first-class.

In 2016, he stormed Takorase in the Demkyembour District with a chopper to commission one of the community Day Schools; again he went to the Afram Plains to campaign with a chopper and later visited Kyebi to commission water project where he described “Kyebi” the hometown of the current President as the headquarters of galamsey after seeing the overview of the destruction caused to lands and water bodies in the area.

In Afram Plains for instance, which is the stronghold of the NDC and the food basket of the country has been abandoned due to lack of developmental projects especially roads by the NDC.

The two constituencies which most of the residents reside on the island don’t have access to good roads and water, as well as experiencing the Fulani menace but keep voting for the NDC in every election.

Mr Mahama in his Green Book expressed that they have achieved an unprecedented road which the Eastern Region is among.

But the chiefs and residents, especially in Afram Plains, cannot testify to that effect of the roads in the area in which the Okyenhene Osagyefuo Amoatia Ofori Panin once led demonstrations against the then government of the bad roads in the region.
When the Okyenhene complained the state of roads in the region to the former president, Mr Mahama was said to have virtually asked the Okyenhene to stop nagging because Eastern region was not alone citing Upper East region.
He reportedly told Osagyefuo Amoatia Ofori Panin that Upper East was also having bad roads so he should stop complaining.

At one encounter, when President Akufo-Addo stormed Donkokrom, in 2018, Nana Kwasi Opoku Mintah, Chief of Kwahu Tafo in Afram Plains, thanked the for visiting the Afram Plains North constituency by road, and seeing for himself the nature of the road network.

According to Nana Kwasi Opoku Mintah, “some Presidents and governments, in times past, only came to visit Donkorkrom using helicopters”, and, as such, did not appreciate the difficulties the people go through.

“You have proven to be different, and we pray that your Government will come to our aid and construct these roads, which have been in a deplorable state for many years,” the Afram Plains Chief said.

In his remarks, he thanked President Akufo-Addo for energising Ghanaian youth across the country with his Free Senior High School policy.
This policy, he added, has allowed Ghanaian youth to chart progressive future for themselves.

President Akufo Addo in 2018 when he visited the area, promised to fix the roads and also construct a bridge on the Volta Lake which so far a company from Japan has conducted a feasibility study on the lake.

Aside from that, the Akufo-Addo administration has constructed a cattle ranch to end the incessant clashes between Fulani herdsmen and indigenous people of Kwahu Afram Plains.

The ranch, located at Wawase in the Kwahu Afram Plains South District, on the 680-acre fodder bank, has been completed to confine over 6,000 cattle.

Mahama in last week when he began a four-day tour in the region, enjoyed his ride on some of the roads tarred by the current administration.

Mr Mahama who under his tenure awarded numerous roads and could not honour the payments of the contracts they signed right from 2014/2015 cocoa season, but continued to sign additional contracts till 2017 when they left office, piling up dubious debt, told the party supporters that the NPP intentionally sacked the contractors from the site without any reasons.

He enjoyed his ride on the Koforidua Townroads which have been asphalted, Anyinam to Kwabeng, Asamankese to Akwatia as well as some of the roads like Akyem Oda to Abirim to Nkawkaw which is under construction.

Speaking at the Suhum Main Lorry station, the former President said, it’s the only NDC government who are good in construction of roads and lied that Suhum has benefited from an asphalt road.

Interestingly, he forgot that in 2016 the Suhum Parliamentary Candidate, Margaret Ansei Aka Magoo, instead of constructing the township roads rather painted them with NDC colours boldly written “Vote for JM, Vote for Magoo”.

His former Chief of Staff, Julius Debrah who also hails from Suhum – Akorabo failed to award conracts for the deplorable roads especially in the village communities, which now the current government has awarded them and constructing and reshaping are ongoing including a 10-kilometre asphalt road for the township.

Apart from Suhum Township road, the Akufo Addo led government has awarded a total of 200 road projects in the Eastern Region.

Some of these projects have already been completed while many others are ongoing.

The Minister of Roads and Highways, Kwasi Amoako Atta in a recent media encounter in the region explained that Eastern Region was inundated with poor roads before President Akufo Addo assumed office but says the roads are being fixed to enable farmers in particular transport their farm produce to market centres as part of the larger plan to boost agriculture and industrialized the country.

NDC National Chairman, Samuel Ofosu Ampofo who is from Begoro where President Akufo – Addo led government has tarred the road from Osiem to Begoro Township and continue to Afram Plains area didn’t see that but rather mocked the government by describing the roads as “Sakawa”.

Samuel Ofosu Ampofo speaking at the Suhum main lorry station on Friday stressed that the generic tag made on the Akufo-Addo government as engaging in ‘sakawa’ sod-cutting spree cannot apply to himself nor the NDC party.

He said ”I am an Akyem but my NDC government never did any Sakawa’ sod cutting like what Nana Akufo-Addo and his NPP are doing today.”

He mocked that, the President and the NPP are engaging in a shambolic groundbreaking ceremony “anywhere they go without having finalised the necessary project contracting.”

“Just yesterday, they were in Koforidua to cut the sod for the Regional Hospital. Today go there and find for yourself how busy the place is now. They carry an axe and shovel with them anywhere…gather the chiefs and lie to them as if they have something better to offer. We didn’t do that. We were commissioning projects,” Mr Ofosu Ampofo emphasized.

He argued that the John Dramani Mahama government offered a better alternative in terms of development for the people but was sadly voted out in 2016 “due to the deception the NPP trumpeted at the time.”