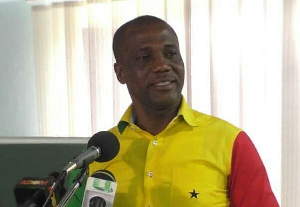 Jacob Osei Yeboah, has opined that it would be impossible for the Electoral Commission (EC) to rig an election.

He believes the systems in place in organizing elections in Ghana makes it impossible for an election to be rigged.

To him, parties need to present competent party agents in an election so they will follow the processes thoroughly.

JOY as he is affectionately called also argued that the electoral officers who refused to sign a pink sheet or declaration sheet do not necessarily invalidate the results.

He was also not happy that the NDC had earlier claimed victory after the declaration but failed to capture the same claims in their petition.

“I am disappointed in the NDC. They made claims that they had won the presidential election and that more votes were added to that of the incumbent government. However, in their petition, they just made mention of 6,000 padded votes. They are now calling for a re-run. They held press conferences and claimed victory but in their exhibits, it has not been captured. I am disappointed in them.”

The vice-presidential candidate for independent candidate Seth Asiedu Walker in the 2020 presidential elections, noted that the NDC’s case lacks merit and may not survive in court.

He said the NDC deceived their followers, gave them false hope, and claimed victory when it was not the case.

According to him, people had hope that the polls should go into a re-run but the exhibits by the NDC have exposed their lies.

Meanwhile, he has advised the former president to withdraw the case and in the spirit of unity, use the election of Alban Bagbin as Speaker to console themselves.

The Supreme Court case he had is a personal interest the former president wants to achieve and not the national interest.

How renting Asokore MCE ejected his co-tenants after getting appointed