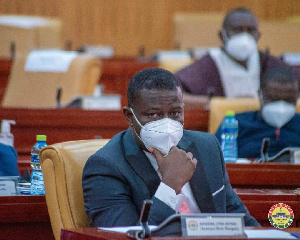 On Wednesday, July 28, 2021, the Cape Coast High Court declared the 2020 Parliamentary elections held in the Assin-North constituency as null and void, however, they have ordered for a fresh election to be conducted in the constituency.

With the minority in Parliament led by Haruna Iddrisu raising a red flag against the ruling, the Member of Parliament for Nsawam Adoagyiri has taken a swipe against them.

According to him, the NDC has rescinded in recent times to accord the needed respect to the court considering the number damning statement they’ve made.

Reacting to Haruna Iddrisu’s statement that the ruling will affect corporation for the development, he said, “He must know that no one is a kid in this country and with this blackmail attitude and tendencies, he should understand he cannot pose any fear in anyone”

Annoh – Dompreh who got hated explained that Ghana governed based on the rules and regulations of the country and said, the NDC before vetting raised concerns but later got to know they have no point and had to appeal to their party base.

According to him, the recent happenings from the NDC do not come as a  surprise since they have been doing it over the years.

“I believe their attitude isn’t the best and it is as a result of bad leadership, they don’t know what they are doing at the moment. If they are saying they will not corporate in Parliament because of the ruling, they should that they are not in Parliament for their gains but rather they are parliament for some Ghanaians who believed and voted for them to be there and Ghanaians have certain expectations and welfare to be delivered”

According to him, he didn’t expect the leader of the Minority to have made such an unfortunate statement and has slammed him for claiming the decision by the court is influenced by the Executive.

“Haruna Iddrisu claiming the decision is influenced by the Executive is the most barbaric and out of the break. How on earth will somebody imagine the Executive is manipulating the court” he angrily fumed.

“As Majority in Parliament, we made it clear to Quayson that the party will disown him and that, has to think about his future but his people pushed him forward and now the court has vindicated the then position of the Majority”.

“We are going to match them boot for boot in making sure that government delivers to Ghanaians, we will not allow the minority to stop us. These threats and blackmail won’t stand, we are tired of them and we telling them that we are not afraid of them. The mandate given to them emanated from the people of this country, they didn’t come to parliament themselves and so if they decide not to work in the interest of the Ghanaian people then they should vacate their seat for us to know Parliament has no minority” he said.

He added, the NPP has been law-abiding both in and out of Parliament.

He has entreated the NDC to show humility knowing that the power vested in them came from Ghanaians and not their own will.

“They should listen to Ghanaians and admit they erred. If they don’t side with the ruling they should appeal it rather than attacking the judiciary which is not good for our country”

“We should stop talking against judges. Haruna Iddrisu must be taken to the cleaners for his statement since he is the leader of the NDC in Parliament”.

Frank Annoh – Dompreh, the Majority Leader of the 8th Parliament has therefore called on Ghanaians not to give to Haruna Iddrisu a listening ear.