struc MMDCE positions: Who becomes the Mayor of Accra - Home Of Ghana News 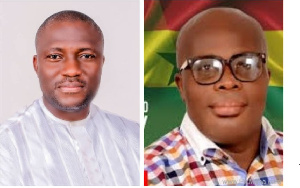 • The race of being the Mayor of Accra is keenly contested

• Vetting is slated for Thursday, May 27. It will be chaired by the Regional minister

Following the expiration of the tenure of the various Chief Executives of the 216 Metropolitan and District Assemblies (MMDAs) and the forthcoming appointment by the president to replace them, some interested individuals have applied for the positions.

In other regions, some of the aspirants for the position have been vetted by committees chaired by the various Regional Ministers.

One of the many MMDAs that is keenly contested and the most talked about is who becomes the Mayor of the Accra Metropolitan Assembly (AMA).

Nathaniel Nii Naate Atswele Agbo Nartey is described by some indigenes of Ga Dangme as someone who has a “lion-heart” to help the current Regional Minister to make the cosmopolitan city work again.

As someone who has travelled around the world, Nathaniel Nii Naate Atswele Agbo Nartey is believed to be a community support specialist and resource in human development.

Most of the best Mayors of Accra are individuals who have lived most of their lives in the Diaspora and as someone who aspired to represent the people of Odododiodio on the ticket of the governing NPP ahead of the 2020 elections, he stands a better chance of making Accra the beautiful capital city as the President Nana Akufo-Addo has indicated.

Raphael Nii Aryaa Tettey, the General Secretary of the NPP Ga Dangme Global Support, a group Nii Naate Atswele Agbo formed, in an interview said his indefatigable leadership and passion has seen the growth of this organization from humble beginnings to become a force to be reckoned with.

“In the 2020 general elections, Nii Naate Atswele Agbo led the group to organize a massive event aimed at celebrating the achievements of the First Lady and the NPP in some Ga Dangme areas. This occasion amongst others was a significant achievement, as it brought together key stakeholders in the Ga Dangme area and highlighted significant contributions the party has made in these areas.”

He added, “I can testify to his excellent leadership qualities which include humility, respect for all, hard work, reliability and honesty, to name just a few. Nii, above all, is an affable gentleman whose strong leadership dispositions continues to inspire many to serve our cause. His sterling effort to educate Gamei about the contribution of the Danquah-Busiah tradition to the cause of Ga Dangmes has not gone unnoticed.

“I cannot recommend him highly enough as a sensational and vibrant Mayor of Accra with sterling abilities; as an American trained community support specialist skilled in harnessing resources for human development. His talents and remarkable abilities will benefit the Greater Accra Region, and Ghana our motherland.”

Mohammed Adjei Sowah, who is currently the Mayor of Accra is also seen as a transformational and progressive leader who has led state and non-state actors through challenging times to a steady path.

Sanitation, a large priority of Mayor Sowah, has long been an issue in Accra, at the nexus of public safety, public health, the informal economy (which employs about 75 percent of Accra’s residents), and emissions contributing to climate change. While this issue impacts all of Accra, it affects Accra’s various communities in different ways, and the solutions must be dynamic so that certain communities are not left behind.

Sowah has emphasized that inclusivity and equity remain at the core of his administration’s work.

Aligning the city’s development and budget frameworks to the Sustainable Development Goals (SDGs) helped maintain those principles amid the COVID-19 pandemic. Accra also committed to publishing a Voluntary Local Review (VLR) to report on its progress towards equity and sustainability. Accra is an active participant in global city networks, including 40 Cities and the Global Covenant of Mayors for Climate and Energy.

Mohammed Adjei Sowah stated that the value of his international engagement, to share ideas, pool resources, and build alliances against cross-border challenges such as COVID-19 and climate change.

The governing NPP is said to vet the candidates contesting for the various MMDAs within the Greater Accra region on Thursday, May 27, 2021.

MP to appear before court over US$2.4 million fraud