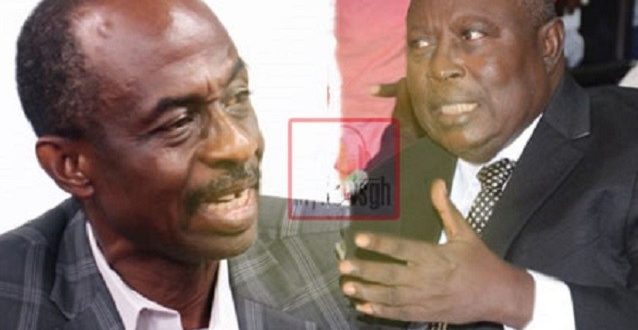 General Secretary of the opposition National Democratic Congress (NDC), Johnson Asiedu Nketia otherwise known as General Mosquito has taken a dig at Ghana’s Special Prosecutor, Martin Amidu over what he described as needless letters of lamentations.

He reminded Mr. Amidu that he was employed by the President Nana Addo Dankwa Akufi-Addo government to go after corrupt persons and not to be complaining with letters as though he is a chief scribe in the colonial era

Mr. Amidu recently claimed heads of various institutions are making his work as the Special Prosecutor difficult revealing how New Patriotic Party (NPP) Director of Communications, Hon Yaw Buaben Asamoa in particular had made attempts to remote-control him.

“Hon. Yaw Buaben Asamoa did this by pretending to be directing me as an ignoramus on how to perform the duties of my Office”, he disclosed in a statement issued on Tuesday July 23, 2019.

Speaking on Accra-based Okay Fm on Friday, General Mosquito said “What at all is Martin Amidu up to? I sent the advice through the media and it was the same media he heard which made him come and write long thesis. He wasn’t appointed to that office to write long letters, he should work and prosecute people”

He reiterated that he had advised Mr. Amidu against accepting the post in the first place but he was impervious which has landed him in the situation he currently finds himself.

“I told him they were just deceiving him. It will all amount to nothing; they just want to destroy his name. We said it and he did not listen.” He recounted.