The Member of Parliament for Asawase, Mubarak Muntaka, has issued a formal written retraction and apology to the Supreme Court for alleged bribery comments made against an unnamed member of the bench.

The legislator and Chief Whip of the National Democratic Congress (NDC) Caucus in Parliament had earlier accused a Supreme Court judge of trying to influence the outcome of the Speakership elections for the 8th Parliament.

In a statement issued on Saturday, February 6, 2021, noted, “I have reflected deeply and consulted broadly on the aftermath and disclosure I made during an interview on Joy News TV on 10th Januuary 2021.”

“The disclosure was made based on a report from a trusted colleague which was that she had been approached by a Justice of the Supreme Court Judge seeking to entice her to vote for a particular candidate during the contest for the Speakership of Parliament,” portions of the statement added.

The Asawase MP in his apology however added that based on good counsel, he will ‘let sleeping dogs lie’ and will consequently refrain from making any further public commentary on the matter.

Following the earlier comments made by the MP, the Ghana Bar Association waded into the matter and called on him to substantiate the claims or retract it immediately.

Also, Chief Justice of the Supreme, Kwasi Anin-Yeboah in a statement issued through the Judicial Service said the apex court will conduct a probe into the allegations of bribery made by the MP.

Read the Muntaka Muburak’s statement below: 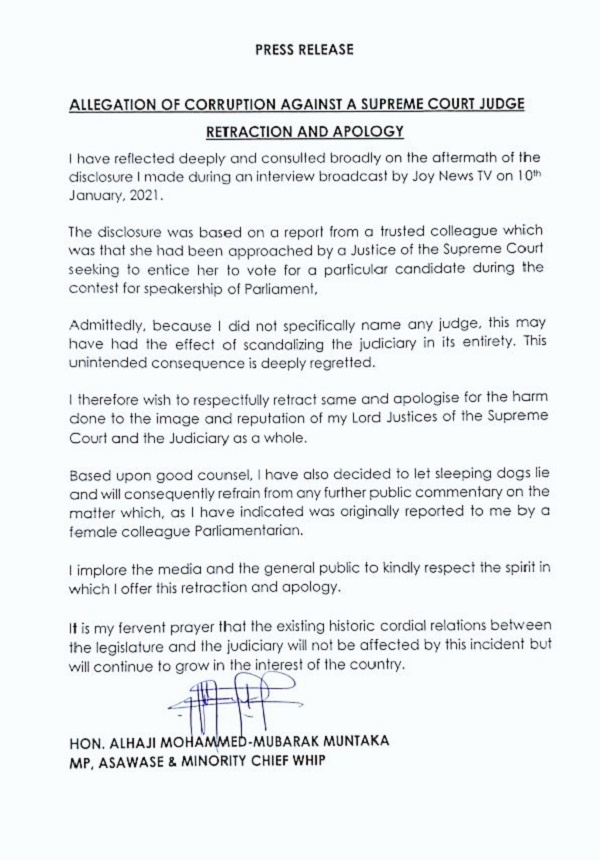