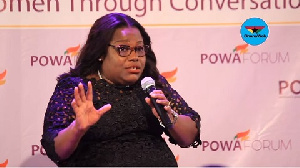 A former Minister of Gender, Children and Social Protection in the Mahama administration, Nana Oye Bampoe Addo, has said the Akufo-Addo government must be blamed for the recent lynching of a 90-year-old grandmother at Kafaba in the East Gonja municipality for alleged witchcraft.

In Nana Oye Bampoe Addo’s view, Akua Denteh would not have been lynched if the Akufo-Addo government had continued with a programme started by the erstwhile Mahama administration under her watch, to do away with the accusation of women as witches.

“We’re talking about the lynching of a 90-year-old woman a few weeks ago; may she rest in perfect peace. Under NDC, under John Dramani Mahama, we started a programme to shut down witch camps and to provide support for women who had been accused of being witches and even to eradicate that customary practice”, she told Blessed Sogah on Class91.3FM’s State of the Nation programme on Wednesday, 5 August 2020.

Asked by the host if she was not politicising the lynching of Akua Denteh, Nana Oye Bampoe Addo retorted: “How do you politicise crime when you are introducing an intervention to address a custom, which adversely violates the rights of women? And because of the neglect of NPP and their failure to continue a well-spelt out programme to eradicate accusation of women as witches, it has led to lynching”.

In her view, it is a mark of failure on the part of the current Ministry of Gender, Child and Social Protection under the leadership of Cynthia Morrison “because they could have gone on with this programme”.

“We closed down a witch camp, which is historic”, she told Blessed Sogah.

“We supported women in witch camps in Gambaga and the other six camps. We gave them LEAP and also even started building a vocational centre at Gambaga for them so that they could be supported, they could be assisted”, she added.

Additionally, she noted that the Mahama administration “ensured that they were even put on the National Health Insurance Scheme”.

“Whenever NDC is in power, women get the maximum benefit”, the human rights lawyer said.

So far, the sorcerer and six others have been arrested in connection with the case.

During a visit to the Savanna Region, Mr Oppong-Boanuh damned the incident.

“The incident was something that was worrying”, he said, adding: “If you look at the age of the woman and what was done to her by her own relatives, is a bit disheartening”.

“Ghanaians in this age and times should not be doing that”, he noted.

“Why is it that it is always the ladies that are being accused of witchcraft?” he wondered.

“We should always ensure that we protect our mothers and sisters”, he urged.

The Bole Magistrates Court is hearing the matter.

Sherina Mohammed was arrested at her hideout at Yeji on Monday, 3 August 2020 in the night.

She led a gang of locals in the village to whip and bludgeon Akua Denteh to death.

A few days earlier, one of the women seen whipping the old woman in the viral video that captured the torture, was also arrested.

Latifah Bumaye, 32, who described the deceased as her grandmother, was arrested by the Salaga police, according to regional correspondent Zion Rauf.

Already, five suspects have been in the custody of the Criminal Investigations Department (CID).

Rauf Zion reported that the five suspects are known members of a youth group of the governing New Patriotic Party (NPP) in Kafaba in the East Gonja Municipality.

The arrests were made by a special team of personnel from Accra and handed over to the Criminal Investigations Department (CID) of the Savanna Regional Police Command at Damongo.

The statements of the five suspects were taken following their interrogation.

They were arraigned and remanded.

The chief of Kafaba, Kafabawura Yahaya Zakariah, who was also questioned by the police, has been granted bail.

On Monday, 27 July 2020, President Nana Akufo-Addo, while touring the region, said the lynching has “disfigured the face of our nation.”

Mr Akufo-Addo said he hopes “the quick response of the police will lead to the rapid administration of justice in this unfortunate matter”.

In a statement, the Ghana Pentecostal and Charismatic Council added its “voice to those of other well-meaning Ghanaians in calling for serious investigations and arrest of all those involved in this heinous crime, which can best be described as very cruel and barbaric.”

The Council emphasised: “We must, at all cost, seek justice for this 90-year-old woman and all those who have suffered such atrocities in the past.”

According to the Council, “it is heart-breaking to note that in this modern-day and age, our society seems to be drifting into an era of lawlessness where some people can take the law into their own hands”.

“There is an urgent need to inject some discipline and sanity into our everyday behaviour as a society.

“We must intensify our education of the public on what their rights as citizens are and what they can do or not do so as to make the society a safe and secure place to live in”, it added.

The Council further indicated: “There is also the need to consider whether it is not time to close down “witch” camps which are predominantly found in the Northern Regions and find ways and means of reintegrating inmates of such camps, who are mostly elderly women and sometimes their children and grandchildren, into the society.

The GPCC added that the lessons of such gruesome murders must be used “to right the wrongs in our society. The elderly, weak and vulnerable must be targeted for the care and protection of our society.”