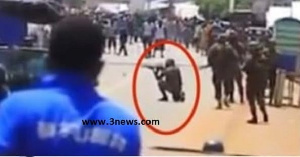 Representatives of the two major political parties on Saturday morning disagreed on The Keypoints on TV3/3FM over the use of the word ‘killing’ for the deaths that resulted from the June 29 unrests in Ejura.

Communications Director of the New Patriotic Party (NPP) Yaw Buaben Asamoa said the use of the word to describe the deaths suggests that the military officers intentionally set out on that fateful day to mete out their action.

He insisted that “killing is premeditated” and, therefore, called on the media and, indeed, Ghanaians as a whole to avoid the use of the word when describing the deaths recorded in Ejura.

The former NPP Member of Parliament (MP) for Adentan Constituency said the use of the word could only inflame passions and emotions of the affected families.

But National Democratic Congress (NDC) MP for Wa West Constituency Peter Lanchene Toobu said no better word can describe what happened to the deceased on that day when soldiers aimed live ammunition at them.

He minced no words as he described the deaths as “reckless killings”.

“The military were deployed by civilians, a regional minister deploying the military. So the wrong deployment ended with the wrong results,” he told sit-in host Alfred Ocansey.

He blamed the current security architecture of the country and lack of accountability in matters of security as part of the cause of security brutalities recorded across the country.

“The chairperson of a security council is not the council. You are only providing policy and political direction for the council but the administrative and operational job is done by the various components in there. If we don’t get it right, we will continue to have civilians deploying military and frustrating the police and we will create the mess and finally we have shooting that will result in killing, reckless killing, indeed.”

Two persons lost their lives while four were severely injured following the riots that erupted after the murder of social media activist Ibrahim Anyass Mohammed, popularly known on Facebook as Macho Kaaka.

A report of the three-member ministerial committee of inquiry set up to probe the cause of the disturbances has recommended compensation for all affected families.

Source: 3news.com
Related Topics:CLASHndcNPP
Up Next