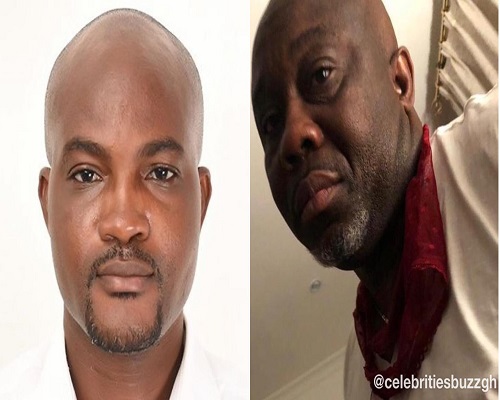 The battle line has been drawn between some members of the NDC party and NPP.

It all started when Information Minister, Kojo Oppong Nkrumah used the trending ‘Papano‘ term on NDC members in parliament.

The NDC members who felt disrespected also threatened that they’ll expose the secret deeds of some NPP members but before dealing with the likes of Kojo Oppong who are the bigwigs, they’ll start with the small ones first..

“We dealing with the small ones first, the big fish will be ready for frying soon George Nenyi Andah! Do you remember this day, and what you said about your wife? See you at 12noon.”, NDC’s Dzifa Gunu threatened on his Facebook page.

A lot of people thought the threat was an empty one but Dzifa has kept his words as he has released some photos of HON. GEORGE NENYI ANDAH, MP for Awutu-Senya West Constituency, Central Region.

In one of the photos, George Andah could be seen having a Spa treat [See below]

A few hours later, Dzifa came back again and posted supposed photos of George Andah that saw him having a female panty hanging around his neck.

“We are back Is that a lady’s panty around his neck? Do you remember why you had to wear the dirty panty around your neck that afternoon, and where? And what you said about your wife to her? Watch out for the video at 3.00pm.”

The ‘Papano’ terms is now used to refer to NDC flagbearer, John Mahama. It all started when Tracey Boakye, Gloria Kani and Mzbel made use of it during their live videos when they were fighting recently on social media — launching verbal attacks on one another.

Apparently, they all make reference to one Papano who has either bought a house for them or bought a car for them. And since all these 3 ladies have a history with the NDC party for that matter former President John Mahama, critics are connecting the dots — saying it was Mahama they referred to as ‘Papano’.

In related issues, Former HIV/AIDS ambassador who was accused of having a relationship with former president John Mahama has also come out to speak on the issue.

Below was what she said: