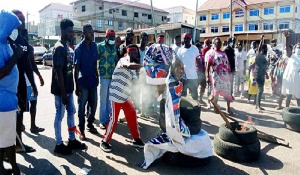 The nomination of Yohane Armah Ashitey for the position of the Metropolitan Chief Executive (MCE) of Tema has been met with stiff opposition by some members of the New Patriotic Party (NPP) in the Tema Central Constituency.

On Sunday afternoon, there was a burning of tyres by some party supporters wearing red hand and headbands who besieged the constituency office and subsequently locked up the party office to register their displeasure at the announcement.

The police were there in time in their numbers to maintain law and order and also convince them to use lawful means to convey their message to the appropriate quarters.

In an interview with the Ghanaian Times on Tuesday, the First Vice Chairman of the Tema Central Constituency, Sylvester Yankey, said all recommendations had pointed to their Constituency Chairman, Charles Boateng, who was supposed to be nominated for the position due to his loyalty and hard work for the party over the years.

He described it as unfair for Mr. Boateng to be ignored and bypassed for MrAshitey.

He said that was not the first time Mr. Boateng had been disappointed and they were not ready to let that happen again and so the party office would remain closed until further notice.

He had earlier on Sunday indicated that it was an unfortunate situation and blamed it largely on tribal politics.