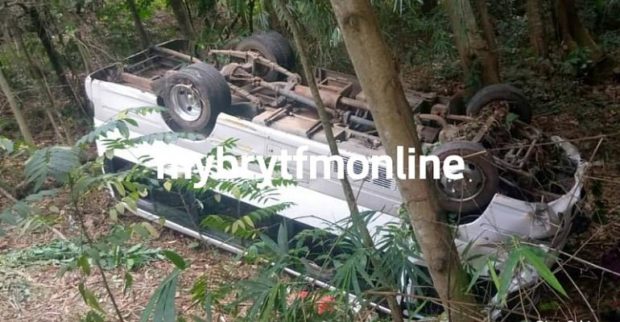 A group of mourners claiming to be supporters of the New Patriotic Party (NPP) have been involved in an accident at the Odweanoma Mountains on the Nkawkaw to Atibie road in the Eastern Region.

According to an eyewitness report, the 24 mourners were in a Hyundai Super roof vehicle with registration number GE 72564-20.

The Nkawkaw Divisional MTTD Commander DSP Foster Asante speaking to the media said the Hyundai Super roof was moving from Nkwatia to Accra but lost control and landed in the Nkawkaw Atibie valley, saying the driver failed his breaks.

DSP Asante confirmed that 12 persons out of the 24 mourners suffered minor injuries and were discharged after treatment.