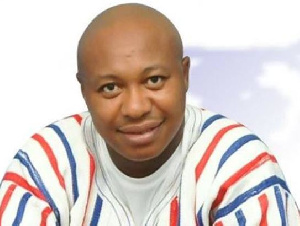 Scores of NPP supporters in the Central region are agitating in the capital Cape Coast over what they call an unfair treatment meted to the region’s 1st Vice Chairman Horace Ekow Ewusi.

The demonstrators drawn from the 23 constituencies of the region accuse the party’s Regional Chairman Robert Kutin Jnr. of hiding behind a faceless petitioner Edward Okraku Adum to suspend his Ist Vice Chairman whom he deems as a threat to his chairmanship position in the next executive election.

Ekow Ewusi was suspended on Monday by the Chairman after the Ist Vice refused to respond to a petition by one Edward Okraku Adum who accused him of engaging in criminal acts including drug peddling, escaping from prison in the UK as well as illegally auctioning seized excavators from mining sites.

Mr. Ewusi is said to have asked the chairman to produce the said petitioner to authenticate his claim before he responds to the claims which the chairman has failed to do.

They youth are urging the leadership to reinstate the beleaguered Ist Vice Chairman as he holds the key to the party’s success in the central region.

Franklin Ayivor, leader of the aggrieved party supporters who are under the umbrella ” Coalition of Concerned Members of NPP, Central Region” addressed the media after their demonstration.

Related Topics:NPP SUPPORTERS
Up Next