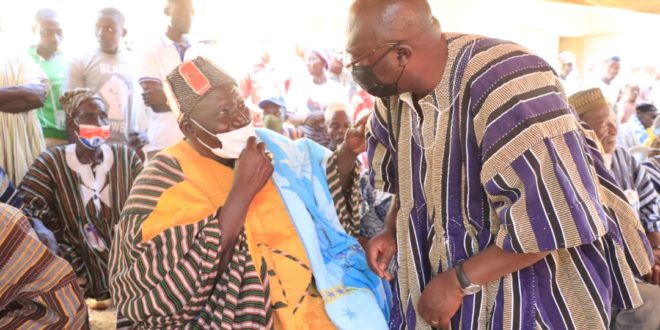 The Chief of Gbankoni in the Bunkpurigu District of the North East Region, Nasimong Laar Haruna II has predicted that the New Patriotic Party (NPP) will win the 2020 polls with a very big margin.

This he stated is as a result of the love shown to the residents of the Gbankoni and Kambatiak zone by the Vice President Dr Mahamudu Bawumia with his regular visits even when he was in opposition.

According to the Chief, the Vice President has not only demonstrated he is caring, he has proven to be someone they can rely on anytime the need arises adding that it is the reason victory will be the party’s.

The Chief also appealed for the establishment of a police post in the area to curb the increasing rate of cross border criminal activities in view of the fact that the area shares borders with neighbouring Togo.

“When you win the elections don’t forget to do the following for us; A police post to curb criminal activities especially robbery and smuggling of fertilizer into Togo from Ghana. We share a border with Togo and when you stand over there you see their houses.

Some of the roads done during Nkrumah regime need some upgrade and I know when you win the second term you would consider working on them. You are the kind of politician we are looking for. You are a grassroots politician with respect and will not ask me to meet you but rather come to me” he hailed.