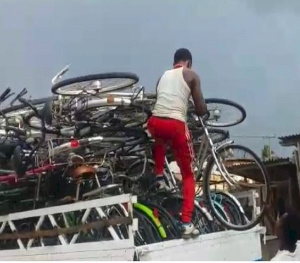 Return bicycles or be sacked – John Boadu to defeated aspirant

The General Secretary of the ruling New Patriotic Party, NPP, John Boadu has issued a stern warning to Eric Amankwa Blay, an aspirant in the just-ended New Patriotic Party (NPP) Parliamentary primaries at Assin North constituency to return bicycles he seized from delegates after losing the election or be dismissed from the Party.

Eric Amankwa Blay gifted 250 bicycles to delegates prior to the election in the constituency ostensibly to influence the delegates to vote for him.

However, he secured 44 votes as against the incumbent MP Abena Duruwa Mensah who polled 389 votes.

Utterly disappointed Amankwa Blay together with some of his supporters stormed homes of the beneficiary delegates with Kia Truck to forcibly retrieve the bicycles from them.

Speaking on Accra based Atinka FM Monday, the General Secretary of the NPP John Boadu described the action of the aspirant as “uncouth” which the party will not tolerate hence ordered him to return the bicycles immediately or risk losing his membership from the party.

“He wants to be exited from the party. Next time he can’t even apply and even attempt to contest in any internal election. Nobody forced him to gift bicycles. Was he expecting everybody to vote for him because of the bicycles, doesn’t it mean if next time someone shares Cars he must be voted for? That is not a democracy”.

He added “he should return the bicycles else he has sacked himself from the party. I am speaking on authority. The party will not recognize him anymore. He is done with the party. We can’t encourage such uncouth behaviour in our party” John Boadu warned.

The just ended Parliamentary Primaries of the NPP has been criticized over widespread vote-buying.

A Political scientist and former lecturer at the Kwame Nkrumah University of Science and Technology (KNUST) Dr Amoako Baah has said the majority of the outcome of the Saturday primaries was influenced by money and not competence or ability to impact good governance in the country.

Speaking to Francis Abban on the Morning Starr Monday, Dr Amoako Baah said money has compromised the value of elections in the country.

“What we are doing is an auction, not an election because the highest bidder wins, as I have been saying, whoever pays the highest money wins. But in some cases if the people are really angry with you it does not matter how much money you pay, they will still vote against you,” he said.