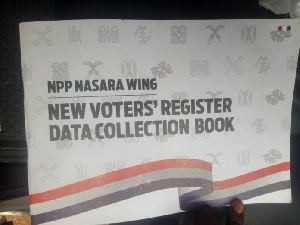 The National Democratic Congress (NDC) in the Sawla-Tuna-Kalba Constituency have chased out a group suspected to be from the Nasara Wing of New Patriotic Party over allegedly impersonating Electoral Commission (EC) officials.

The group were alledged to be taking vital information of potential voters.

Nkilgi FM sources say some NDC executives led by the Savannah Regional Chairman, Alhaji Alhaji Seidu Imoro, two days ago, followed members of the group to a community called Nakwabi to retrieve some of their documents as evidence and as well told them to leave the community because they were not EC officials.

The NDC Communication Officer for the Sawla-Tuna-Kalba Constituency disclosed to Bole based Nkilgi FM that the NPP Nassra wing members have visited several communities and preliminary reports to the NDC indicate that, the voters’ identity cards of the community members were being recorded.

Kipo Elijah said; “Our sources indicated they are through with the Komkomrope area and maybe at Nakwabi area and members of the group are giving different reasons at different communities. While others are saying they are processing loan facility, others say they are doing a household census with others saying they are from the statistical Service”.

The NDC Communication Officer said the party has therefore sent notices to its members which enquires from them to show proof the department, agency or organization they are from; the purpose of the said exercise and the identity and contacts of the people involved.

Mr Kipo said the Constituency executives will be dispatching a team to all areas in which the suspect the group had visited.

Mr Kipo Elijah said when the NDC called the Sawla-Tuna-Kalba District Electoral Officer to enquire if they are embarking on any exercise involving taking information on the voters’ identity cards of residents of the area, he denied sending any team round to take such information.

A Deputy Savannah Regional Youth Organiser of the NDC also speaking on Nkilgi FM warned the NPP not to try anything fishy on potential voters.